In which I select a few items from the swirling mass of feminist (or rather anti-feminist) rumblings from Stacy McCain this week:

If you only do one thing this week, watch the video below. This woman flat nails the evolution of the relationship between the sexes, and projects a dark vision of the future, if we don't figure this thing out:


Exactly how I never before noticed the blog “Owning Your Sh*t,” I’m not sure. This lady has got it nailed cold:


Okay, someone commenting on my last video scoffed at my assertion that unless our attitudes change, society will, sooner or later, reach a…well, let’s call it a “fempocalypse.” That is, thatfeminism will eventually help bring about an economic and social collapse.
Many people are simply unable to wrap their heads around that idea, because we’ve all been told, ad nauseum, that feminism is a cause of prosperity, when in reality, it is largely–perhaps entirely–a consequence of it.

Which brings to mind the Underpants Gnome theory of feminism:

Which is really just a subset of the liberal activist theory:
Where ???????? represents the period they think they will be put in charge to fix everything. In fact, it's almost certain, they'd be lined up against a wall and shot.

That is to say, he’s a dangerous pervert:


Benjamin Levin was consistent and “realistic” in his descriptions of sexual assault of children during online chats and never once stressed that it was all for fantasy, the Crown argued during day two of his sentencing hearing on child porn charges.
Crown counsel Allison Dellandrea read aloud several extremely graphic chat exchanges the former Ontario deputy minister of education had with undercover officers he believed were submissive mothers interested in having sex with their own children.
The 63-year-old married father of three repeatedly and consistently claimed to have had sex with his own daughters, starting at age 12 (though, as he told one of the officers, “I wish we’d started younger.”).

. . .
Because he has no self-respect and recognizes no real standard of morality, the “feminist man” is quite often a very dangerous kind of pervert. Benjamin Levin, who served as the “education expert” in Kathleen Wynne’s campaign, is a perfect example of his type. And it’s not a good type.


Some will say that it is an oxymoron to speak of feminist logic, but after many months of careful study, I have mastered the basics:

This is the simplest understanding of feminism, i.e., whatever arguments are necessary to persuade unhappy women that voting Democrat is the best revenge. However, mastering Advanced Feminist Logic™ requires the disciple to accept without question the premise that women are universally oppressed by patriarchy. All women are victims of this system of oppression, the feminist believes, and all men benefit from it. . .


@IjeomaOluo is a feminist and a thoughtful writer.
This is a rare combination. Feminism has for decades been an intellectual ghetto inhabited by bad writers spewing tedious jargon (the misogynist oppressor mansplained, sitting at his desk surrounded by about five dozen books of feminist theory). Oluo writes about a Tumblr vigilante site called Racists Getting Fired:


Finally! A way to battle all those nameless, faceless hatemongers of the Internet . . . Finally, people are having to face some real consequences for their hateful and harmful behavior. This is the moment of comeuppance, and boy, is it satisfying. . . .
So now, now we have doxxing in the name of Social Justice and truth.
But we still have doxxing in the name of control and terror. . . .
It wasn’t long before the inevitable happened to Racists Getting Fired; an innocent person was doxxed. Brianna Rivera found herself on the receiving end of threats and harassment after an ex-boyfriend impersonated her online with posts that made her look like a racist. A few minutes of investigation showed it was fake, but the Internet doesn’t self-correct: People ride the wave of fury and then move on to the next target. By the time a retraction was posted, she had already faced investigations by both her employer and the university she was attending. Even now, people are still sending her hateful messages for her nonexistent bigotry.
Those of us fighting for progress and equality believe that we’re working on the side of good, and most of us are. But when we look at language used around doxxing for “good,” it’s very similar to the language used by those trying to silence us. . . .

You can read the whole thing and, while Oluo makes many of the usual simplistic assumptions — e.g., advocacy of “social justice” is synonymous with personal virtue — her skepticism toward the progressive mob mentality is encouraging. Identity politics invariably leads toward a Manichean worldview and the dangerous self-righteous fanaticism summarized in the radical slogan “By Any Means Necessary.” 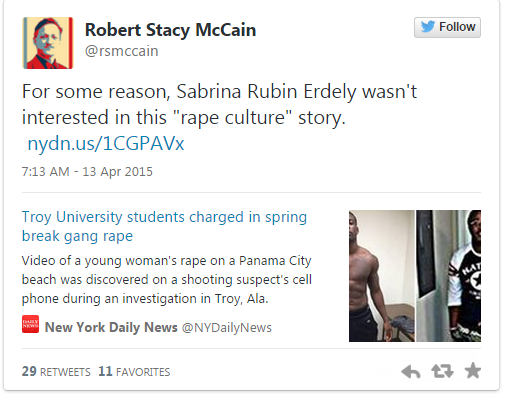 Crazy People Are Dangerous and most feminists are crazy:


Deborah E. Frisch, Ph.D., is due in court Monday:


The former University of ­Oregon professor released from jail [March 30] after pleading guilty to making a false report against a Eugene police officer is again behind bars on similar charges.
Deborah Ellen Frisch, 53, is facing a charge of initiating a false report and a probation ­violation in the previous case.
According to court records, Frisch returned to her home on Modesto Drive on Monday after being held in the Lane County Jail for 39 days and within two hours of her release called the Eugene Police Department’s nonemergency line.
During that call, court records show, Frisch accused two police officers who served a search warrant on her home of having sexual relations in her bed and leaving behind bodily fluids and sexually transmitted diseases.
. . .
For several years between 1988 and 2001, Frisch taught at the UO psychology department. She then taught at the University of Arizona but resigned in 2006 after writing inflammatory online comments to a conservative blogger.

Oh, that Deb Frisch! You remember this notorious moonbat who thought she could use the anonymity of the Internet to make obscene and perverse suggestions against Jeff Goldstein of Protein Wisdom.

The interesting thing is how such wackos continue to thrive in liberal academia.

The #AreYouBlocked Test: Gamers, Lesbian Feminists, the Pope and Me


If you’re wondering what the #AreYouBlocked hashtag is about, click here to see the League of Gamers “Blocklist Checker” site.

What has happened? It’s simple: Crazy people do crazy things.

One thing crazy people do is to accuse others of “harassment.”

Randi Harper (@Freebsdgirl) decided to make herself the Social Justice Warrior (SJW) queen by creating a “blockbot” so that Twitter users could automatically block #GamerGate activists. Other SJWs have created a blockbot “that identifies Twitter’s ‘anti-feminist obsessives’ (they’re nominated for inclusion by a group of trusted, preapproved users), sorts them into categories of offensiveness ranging ‘tedious and obnoxious’ to ‘abusive bigot,’ and allows users to pick the level of vitriol they’d like to excise from their Twitter feeds.” (That Slate article was written by@AmandaHess who, of course, has me blocked on Twitter.)

Like many other feminists, Randi Harper suffers from mental illness and has discussed her prescriptions for Ativan (Lorzepam) and Trazodone, powerful drugs used to treat depression and anxiety disorders. The fact that someone under psychiatric care has appointed herself an arbiter of Twitter “harassment” should be a flashing yellow caution light about her project, for which she is using Patreon.com to raise money.

“Let’s give money to a crazy woman! What could possibly go wrong?”