Ebola: US a Day Late, a Dollar Wasted

Empty Ebola Clinics in Liberia Are Seen as Misstep in U.S. Relief Effort


. . .after spending hundreds of millions of dollars and deploying nearly 3,000 troops to build Ebola treatment centers, the United States ended up creating facilities that have largely sat empty: Only 28 Ebola patients have been treated at the 11 treatment units built by the United States military, American officials now say.

Nine centers have never had a single Ebola patient. 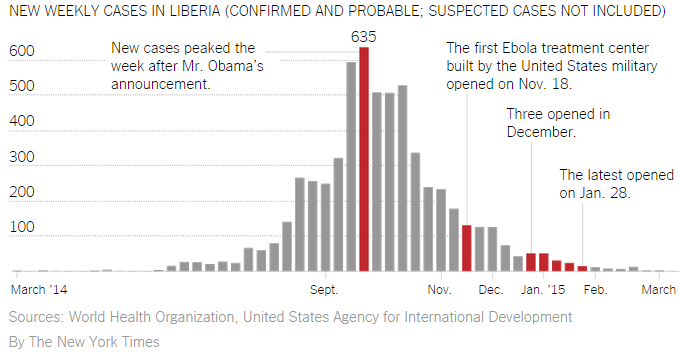 Had the Americans and other donors been more flexible, critics and some officials contend, the money could have been put toward rebuilding Liberia’s shattered health care system — or backing the efforts of local communities — instead of focusing on treatment centers that would scarcely be used.

“I knew that most of the E.T.U.s that were being built may not receive a single patient,” said Dr. Francis Kateh, who helped lead the response of the Liberian government, which decided with the Americans where to build the 11 centers.

“But at the same time, you couldn’t put a stop to that process,” he added. “The train was coming full force.”

I guess something is better than nothing, but maybe not much. A little more foresight into the process of controlling a disease like Ebola could have helped. In this case I don't mind the money as much as for other boondoggles, but I do feel for the 3000 US soldiers unnecessarily sent overseas and threatened with exposure to the disease.

Hopefully we'll learn something and do better next time. But probably not.
Posted by Fritz at 8:39 AM