Sorry about yesterday's low output and today's late start. Had a retirement party for an old friend and colleague to attend yesterday, and just didn't feel like putting something together when we got home.

Down in Georgia, an Antifa dude protesting the clearing of forest for a police safety training center, fired on, and hit at Georgia policeman. He (fatally) lost the ensuing firefight. Antifa has now declared war on police in Georgia, which I predict will not end happily for them. Chris Queen at PJ Media, Antifa Forces Lay Siege to Georgia County in Battle Against 'Cop City.' “Consider this a call for reciprocal violence to be done to the police and their allies. On Friday, January 20th, wherever you are, you are invited to participate in a night of rage in order to honor the memory of our fallen comrade.” John Sexton at Hot Hair says Police reveal details about shooting of state trooper that undermines claim by 'forest defenders'. Ace, Antifa Shoots a Cop in Atlanta; After the Police Respond and Kill a Thug, Antifa Groups Call for a "Night of Rage" and Violent Retaliation Against the Police. Biden, the FBI Remain Silent. "Four have been charged with domestic terrorism in the shootout with police."

In Presidential politics CNS News highlights Biden's Proposal to Increase Debt By 57.8%. VodkaPundit at PJ Media notes Biden Orders A Bacon Burger, WaPo Wets Itself. Sundance reports President Trump Outlines Policy Video Calling for Ban on China Acquisition of American Infrastructure. Breitbart notes Donald Trump Takes Double Digit Lead in 2024 Republican Primary. At WaEx, Nikki Haley teases 2024 bid, saying 'I can be that leader'. I don't see it myself, but she's still better than Kamala. At Da Caller, Laura Duggin want us Meet The Dem Governor Quickly Rising To The Top Of The 2024 Short List. "Democratic Maryland Gov. Wes Moore, who was sworn into office Wednesday morning" Can we at least wait until we see if he's a decent governor?

At the Wombat's In The Mailbox: 01.19.23, at Am Think Jay Valentine warns that in 2024: Republicans on Course to Get Blown Out by Phantoms. Breitbart, California: 10.8 Million Mail-In Ballots ‘Unaccounted For’ in 2022 Elections. Is that all? Vicky Marshal at Da Fed reminds us that With 25,000 Mysterious Votes And Missing Documents, Maricopa’s 2022 Election Process Marked By Chaos And Uncertainty.

John Sexton, again, Number of Virginia high schools who failed to inform students of merit awards rises to 17. Fire the principals, and anyone who had prior knowledge and didn't protest.

There are no really new revelations in Garage-gate, other than the revelation that Photos Place Hunter Biden in Corvette at Site of Classified Docs in July 2017, "Hunter Biden's access to Corvette also suggests he may have had access to classified documents." (Free Bacon). Jazz Shaw, Was Hunter photographed in the vicinity of Biden's classified documents? Yes. Fox reveals Biden classified document investigation: Secret Service ready to provide Delaware visitors, source says. "Secret Service prepared to turn over documentation of visitors to Biden's Delaware home if requested by Congress, source familiar with situation tells Fox News." That should be amusing. At Breitbart, Hunter Biden Lived in Wilmington House with Classified Documents While Bagging Millions Linked to the Highest Levels of Chinese Intelligence.

At Am Spec Emmett Tyrrell speculates on  Biden’s Document Deluge, "Will there be a fourth trove?" It seems likely.  Paul Bedard at WaEx, Supermajority want Biden document scandal probed. At Breitbart, Clyburn on Biden Having Classified Documents: ‘These Things Happen.’ At the Strategy Page, Austin Bey is On Point: The Biden Classified Docs Special Prosecutor Must Look For Chinese Spies. Yep. They're lurking nearby, for sure. Breitbart reports Report: White House, DOJ Agreed to Hide Classified Document Scandal, which is effectively what a Special Counsel does, if that's what they want. At Da Caller, White House Counsel Refuses To Say When Biden First Knew About Classified Documents.  At Am Think  John Green thinks about Two Special Counsel Theories -- One DoJ Conclusion ""I personally subscribe to theory 1. Merrick Garland appointed a special counsel to investigate Joe Biden’s document indiscretion, as a means to obstruct the imminent congressional investigation. . . Theory 2 is that Merrick Garland is part of a Democrat conspiracy to toss Dementia Joe under the bus, so they can run over him before the next election." 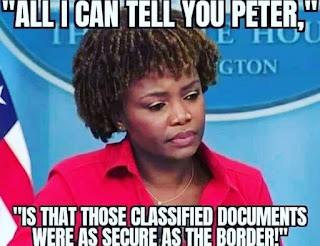 At Da Wire, Virginia Kruta at Da Wire hears reporters ask ‘Are You Sorry?’as Reporters Bombard Karine Jean-Pierre Over False Statement On Classified Docs and Joseph Curl asks Is Karine Jean-Pierre The Worst White House Press Secretary Ever? All Signs Point To Yes. Mediaite reports White House Correspondents Reportedly Fed Up With Jean-Pierre: Briefings ‘A Painful Waste of Time’ and that's the point. Sister Toldja at Red State sees Karine Jean-Pierre in the Hot Seat After Some White House Reporters Go Rogue. Harold Hutchinson at Da Caller tattles on a CNN Reporter who Claims Classified Documents Are Mishandled ‘Every Day’: ‘Completely Accidental’ which is, no doubt true. But we don't know Biden's mishandling was accidental. At NewsBusters, MRC’s Bozell Predicts ‘Armageddon’ for Media If the Biden Documents Scandal Grows Further. At Front Page, ‘Comcast’s Secret Weapon’ Opened the Penn Biden Center "Comcast, China and classified documents." 'Bonchie' at Red State notes how Joe Biden Snaps at Reporter, Provides All the Wrong Answers on Classified Documents Scandal. "I have no regrets."

Sundance has the video where Tucker Carlson Outlines the Intersection of the Unelected Administrative State and The Fourth Branch of Government and During Remarks at World Economic Forum FBI Director Chris Wray Talks About Success in Combatting Pre-Criminal Activity. Pre-criminal?

Beege Wellborn at Haut Hare wonders Is McCarthy willing to duke it out over a debt ceiling raise? At Da Caller, House GOP Reveals Its First Oversight Hearing Target. The border. Ace, Marjorie Taylor-Greene Thinks She's In Some Contest Where You Win If You Can Prove You're the World's Biggest Kevin McCarthy Sycophant. "I understand her constantly simping for Trump. He was president, he's the leader of the biggest new political movement in decades, and he's a larger-than-life personality. But Kevin McCarthy? Does she just always need some kind of male Daddy figure to glom onto?" KT at Haut Hare, Rep. George Santos denies being a drag queen in Brazil, but isn't that supposed to be a good thing? Jeff Dunetz at Da Lid maintains George Santos Isn’t Lying, He’s Crazy. Also from KT, 'Boy Meets World' actor to run for Adam Schiff's seat in Congress. Ben Savage He couldn't be worse. Maitland Ward might even be better.