Flotsam and Jetsam - Biden Has No Regerts

Wow, an odd day for sure. First, Stacy McCain follows up on the story about Antifa declaring war on cops in Georgia, Dear Antifa Terrorists: Please Go to Georgia, So Cops Can Kill All of You

Georgia ain’t Oregon and Atlanta ain’t Portland, OK? So if the unbathed terrorist mobs of Antifa want heroic martyrdom, Atlanta’s the place to be, because cops down in Georgia shoot to kill:

Portland is hardly representative of the rest of Oregon. Trust me, you don't want to get on the bad side of the loggers and ranchers (and law enforcement in their parts of the state) either. Nick Arama at Red State, Police on 'High Alert' After Antifa Threat of 'Night of Rage, Twitter Takes Action

At the Wombat's In The Mailbox: 01.20.23 EBL, Supreme (still) Court Can’t Figure Out Who Leaked Dobbs. NewsMax, House Judiciary to Continue Probe Into Supreme Court Dobbs Leak. At the Right Scoop, House Republicans to investigate Supreme Court leak and Jonathan Turley thinks they might succeed… by offering immunity.  Matt Vespa at Haut Hare VIP, The Only Shocking Thing About the Supreme Court Leaker Probe Isn't Even About the Culprit. At Fox, Sen. Kennedy sends message to SCOTUS leaker: 'Congratulations, butthead,' you almost got a justice killed.

At NYPo, Prosecutors knew early they would charge Alec Baldwin in ‘Rust’ shooting. At Fox, Andy McCarthy argues that in the 'Rust' tragedy: Alec Baldwin should not be charged in criminal case over shooting death of Halyna Hutchins. "What happened with Alec Baldwin and Halyna Hutchins in New Mexico on the set of 'Rust' was a tragic accident." But isn't that sort of the definition of involuntary homicide? PJ Media's Matt Margolis argues Alec Baldwin Wouldn't Be In Trouble Today if He Were a Conservative. "Hutchins might still be alive had a National Rifle Association safety advisor been on the set of Rust. According to Judge, they are typically present on other movie sets. “Her death is the result of the kind of dogmatic, self-righteous leftism that Baldwin espouses,” Judge writes. Jim Treacher thinks Alec Baldwin Might Get Locked Up Before Trump Does. " Evita Duffy-Alfonso at Da Fed writes Alec Baldwin Baffled That He, Not The Gun, Will Be Charged With Manslaughter.

Sundance at CTH, Giddy up – If I Can See It, So Can President Trump – Thus, the 2024 Trump Campaign Kick-off in South Carolina. Insty, is on my wavelength regarding Nikki Haley, HER MOMENT, IF SHE HAD ONE, HAS PASSED. "Nikki Haley sure sounds like she’s running for president: “Stay tuned.”  Am I running for President? Stay tuned. But seriously, her moment, if she ever had one, has passed. She might serve in DeSantis’s cabinet."

Fox Business, Joe Manchin has helped steer millions in federal funds to groups linked to his wife "The 2021 federal infrastructure bill Manchin helped push through Congress gave a staggering $1 billion to a commission headed by his wife." Just coincidentally, I'm sure, Town Hall's Cutie Pavlich informs us Joe Manchin's West Virginia Approval is in the Toilet.

Dave Harsanyi at De Fed details how Democrats Propose Overturning The First Amendment. At Front Page, the great Victor Davis Hanson calls out The Manic Methods of Mad Democrats "A party's descent into a woke, neo-socialist, radically green party." At the Wombat's In The Mailbox: 01.20.23  Twitchy: Eric Swalwell Tries To Blame Trump For Democrats’ Spending.
Via the Wombat's In The Mailbox: 01.20.23, at Da Fed, Shawn Fleetwood gets Inside Democrats’ Newest Election Takeover Scheme: Report Unmasks ‘Dark Money’ Group You’ve Probably Never Heard Of and The Geller Reports With 25,000 Mysterious Votes And Missing Documents, Maricopa’s 2022 Election Process Is In Chaos  At WaEx, Arizona court shoots down GOP challenge and upholds state's vote-by-mail system.
The Philly Inquirer reports on A Philly man bragged about wanting to relieve himself in Pelosi’s office on Jan. 6. Now, he’s headed to prison. "After the attack, James Rahm Jr. posted on Facebook that he'd walked through Pelosi's office and should have "s— on her chair." A judge sentenced him Wednesday to a year in prison." To quote Mike Starrett, "Facebook is the Devil." AP, Jan. 6 Defendant Convicted on Separate Weapons Charges. "A jury has convicted a Navy reservist from Virginia accused of storming the Capitol on Jan. 6 on separate charges that he illegally possessed silencers disguised to look like cleaning supplies." 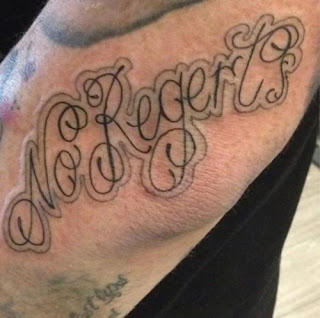 Via the Wombat's In The Mailbox: 01.20.23, Liz Shield at Am Great notes Biden Has ‘No Regrets’ About How Classified Docs Handled and Twitchy, Special K Reminds Us That Sleepy Joe Takes Classified Information Seriously. Matt Margolis at PJ Media, Joe Biden Has 'No Regrets' About Mishandling Classified Documents, Eddie Scary at Da Fed writes D.C. Journalist Proves Biden Did Absolutely Nothing Wrong By Assuming He Did Absolutely Nothing Wrong. Nick Arama at Red State, Report: DOJ and Biden WH Had 'Understanding' to Keep Classified Document Finds 'Quiet'. John Sexton at Haut Hare reports Anita Dunn was behind the decision to keep the classified documents story from the press. At Da Caller, NYT Details How White House Thought They’d Get Away With A Cover-Up.  Da Wire, Biden Issues Statement Over Classified Document Scandal. Dave Keltz at Am Spec speculates that Biden’s Classified Documents Scandal Proves the National Media Is Dead "The leftist propaganda media is anti-American."
At Wa Ex, Picture of boxes and documents in Joe Biden's garage lays bare his Delaware security. At Breitbart, Joe Biden Claims Garage Was Secure While Wilmington Theft Soared 21% in 2022. Star News reports Biden Has No Answers on Chain of Custody for Classified Documents from His Time as VP Discovered in His Residence and Penn Biden Center Offices. Mary Chastain at LI says Secret Service has a List of Regular Visitors to Biden’s Delaware Home That Stored Classified Documents, "Now we learn the Secret Service collects “information on guests with regular access to the home.” Mediaite claims Matt Gaetz Rolls Out Bizarre ‘Inside Job’ Theory in Defense of Biden: Classified Documents Were Planted, well it certainly was done by Democrats, but I doubt they "planted" them. From the Wombat's In The Mailbox: 01.20.23, Don Surber: Democrats Taking Biden Down. John Sexton at Haut Hare reads Jonathan Alter: Maybe it's time for scandal tarnished Joe Biden to step aside, as does Althouse "Just two weeks ago, Democrats were chortling over chaos in the G.O.P., convinced that far-right Republican control of the House would help them in 2024." New Neo tells Biden’s classified documents as a story.
Sundance reports DOJ Tells Republican Congress Not to Expect Cooperation and Thank You. As expected. ET, Kash Patel: ‘I Have No Faith’ in Special Counsel’s Probe of Biden Documents. And why would he? Ace, with red  italic font and the flaming skull, Mike Lee: The FBI Came to Us in September 2020 and Told Us That a Foreign Government Was About to Leak a False Story About a Biden Family Member -- and That We Should Neither Believe It Nor Repeat It  "I think this is new news, isn't it? We know that the FBI gave Grassley and Johnson a false "defensive briefing" warning about Russian disinformation -- but we've never heard the FBI deliberately lied to Senators and told them the laptop story was fake."
Stacy McCain takes on The Penn Scandal: Ivy League University Was Funnel for Biden’s Chinese Cash. "Can anyone explain the Chinese Communist government’s sudden increase in generosity toward Penn once the university made its deal with Biden? As Guttman said, the selling point for the deal was Biden’s “unmatched personal connections . . . with world leaders,” and maybe what she meant was, “We’re going to get lots of Chinese payola.”" Across da pond at Da Mail, EXCLUSIVE: All in the family: Joe Biden is named in 2017 email discussing multi-million dollar gas deal with CHINA, with Louisiana lawyer writing to brother Jim that he 'arranged a call' with the former VP and his son Hunter 'to discuss the purchase'. Rusty Weiss at PI  Reports Joe Biden Named in Email Discussing Call With Hunter About Major Gas Deal With China. Ace, Email from Hunter's "Business" Lawyer Names Joe Biden as Being Scheduled to be on a Phone Call Discussing Sale of Natural Gas to China. "Never discussed Hunter's businesses with him, not a single time, Jack! This is the year after Biden left the Vice Presidency, when he believed he would just have a career buckraking, but wasn't fully committed to that. He was still trying to keep himself "clean," using Hunter as his frontman."
Linked at Pirate's Cove in the weekly Sorta Blogless Sunday Pinup and links.
Posted by Fritz at 11:03 AM