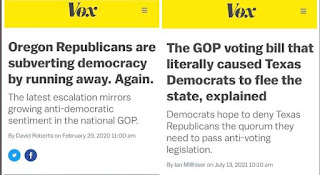 What a heap!The efforts of Texas house Democrats to block voting reform legislation by fleeing to Washington DC, and deprive the Texas House of the quorum they need to pass the legislation is still the talk of "the town." (Da Caller). Cutie Pavlich at Town Hall reports Texas Democrats Are Getting Roasted for Their Latest Stunt. At Breitbart, Gov. Abbot of Texas points out the hypocrisy of  Dems ‘Using a Filibuster to Flee’ So They Can ‘Plead with the President to Do Away with the Filibuster’. Nick Arama at Red State, Greg Abbott Skewers the Lies of the Runaway Texas Dems and Decimates Joe Biden In the Process. At CNS News, Ted Cruz points out,  Texas Dems Who Fled the State Over Voter Verification Bill Had to Show I.D. to Board Their Private Jet.  As Bryan Preston at PJ Media notes Texas Democrats Running Away From Their Duties Isn't New or 'Uncharted''. At PM, Watch Tucker Carlson slam Democrats' growing hysteria on voter integrity laws

They make it so easy for us to dunk on them. pic.twitter.com/Rlf3xnmGBv

Via the Wombat's In The Mailbox: 07.13.21, Jordan Davidson at Da Fed, Texas Democrats Throwing Tantrum Over Election Integrity Tout Their ‘Sacrifice’ As They Flee State In Private Jet. From PM, CRINGE: Democrats who fled Texas to oppose election integrity law sing 'We shall overcome'. Fox, Texas State Democrat mocked for calling himself 'fugitive' after fleeing state to block voting bills "'Fugitives don't typically get catered lunches'" Twitchy, Texas Democrat who RAN from his duties acting all big and BAD on Twitter (behind his face diaper) does NOT go well, like at all. Town Hall's Guy Benson wonders What Are Texas Democrats Thinking?.  Also from the Wombat's In The Mailbox: 07.13.21, Jeff Dunetz at Da Lid notes Democrats Are Fighting Against One Man One Vote, NOT Voter Suppression. But the WaPoo offers fulsome praise in Democrats’ flight from Texas: A phone tree, a scramble to pack and a risky trip and Texas Democrats plead with Congress to act on voting bill; state Senate passes its version

Bonchie at Red State is just one of many to report Texas Republicans Say Enough and Officially Vote to Arrest Fleeing Democrats. From the Wombat's In The Mailbox: 07.13.21, Nice Deb at Am Great, is happy that Texas Gov. Abbott Says Fleeing Democrats Will Be Arrested When They Return to Austin,and The Geller Report: Texas House Votes 76-4 To Send Sergeant At Arms To Detain Or Arrest Fleeing Members, but as the Babylon Bee surmises, Other States Look To Texas For Advice On How To Get Democrats To Leave.

"We hope to follow the great example set by Texas," said Georgia Governor Brian Kemp. "Democrats have this nasty habit of destroying their states like a plague of locusts, turning it into a burnt husk of death and decay, and then moving to another Republican state to feast on the prosperity built by higher quality people than they'll ever be, then importing their depraved and inhuman policies as they consume all the wealth and happiness of the state like some sort of demonic chupacabra, until they finally bring a once-great American state to its knees, drowning in a cesspool of poverty and corruption, at which point they spread their locust wings and fly to the next state... what was I talking about? I can't remember. Oh yeah—how do we get Democrats to leave?" 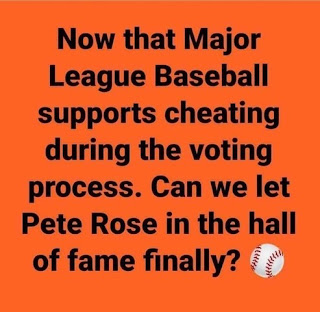 Sundance at CTH brings a Fulton County Update – New Evidence Reveals Significant Fraud, Even in the Audit, and Thousands of Double Counted Ballots and Arizona Senate President Karen Fann Announces Ballot Count Discrepancy Between Forensic Audit and Maricopa County Records, “They haven’t released a number yet, if you will, however we do know that those numbers do not match with Maricopa County at this point.” Dan Chaitin at WaEx, reports the Arizona Senate president says 2020 election audit's ballot count differs from Maricopa tally  At Ace's Dave in Fla continues his analysis of the election with The Curious Case of Idaho. Why would Democrats bother to cheat in Idaho? Why not Breitbart, don't turn on the lights, I don't want you to see! Pennsylvania Sec. of State: Don’t Comply with GOP State Senator’s Election Audit Request. WaPoo happy ‘This is really fantastical’: Federal judge in Michigan presses Trump-allied lawyers on 2020 election fraud claims in sanctions hearing. Obama judge. PM, Rashida Tlaib goes on bizarre rant about 'voting rights' at vaccination event. More bizarre than most of her other rant? That's a high bar!

Greg Piper at JTN, January 6 inmates endure ‘human rights violations on a daily basis,’ bail motion alleges Yahoo! repeats the AP, Are Jan. 6 rioters traitors? So far, criminal charges say no, and Jazz Shaw at Hot Hair, No treason or sedition charges for January 6 rioters. But Aaron Blake at  WaPoo says Yes, it was an insurrection. Julie Kelly is still following the fate of those arrested at AM Great, The Government’s Case Against a ‘White Supremacist’ "The Biden regime is getting exactly what it wants from the manhunt for Capitol protesters who opposed Biden’s election and supported Donald Trump." Ace, Megyn Kelly: "No Question" About Whether the Media Exaggerated the Capitol Riot to "Make It Worse Than It Actually Was" "You're not allowed to speak the truth here; this is America!" Steven McCann at Am Think thinks there is  So Much Evidence that January 6, 2021 was a Calculated Set-Up. No, not yet!  Breitbart, Thompson: We Will Investigate If GOP Reps Helped Capitol Rioters, Could Refer Them to DOJ. At Hot Hair, Karen Townsend thinks  Leahy's angry rant to reporters about the Senate's capitol security funding bill is... something. At the City Journal, After January 6, a Long Way to Go "A reimagined U.S. Capitol police force will still need fixing." Imagine there are no Capitol Police.

Why now? Why not rely on the Secret Service, which investigates threats against high-level federal officials; or the FBI, which has made more than 500 arrests in connection with the January 6 attack on the Capitol? Could the reasons be that the Capitol Police are the only federal law enforcement agency whose personnel are appointed by Congress, and that the agency is the only one not subject to the federal Freedom of Information Act?

On the Harris/Biden surveillance state, Kevin Downey at PJ Media,  FBI Calls for People to Rat Out Friends and Family, Gets Clown-Slapped on Twitter and Mark Tapscott at ET, Judicial Watch Asks Court to Order USPS to Disclose Social Media Snooping Documents. And at Da Caller, House Republicans Demand Information From NSA About Allegations The Agency Illegally Spied On Tucker Carlson.

“It gives me no pleasure to say this. I never thought my entire career I’d ever have to say. But, I swore an oath to you, to God, to preserve, protect and defend the Constitution. That’s an oath that forms a sacred trust, to defend Americans to all threats, both foreign and domestic,” he added, with emphasis on “domestic,” implying Republican efforts to secure elections are akin to domestic terrorism.

“The assault on free and fair elections is just such a threat. Literally. I’ve said it before. We’re facing the most significant test of our democracy since the Civil War. It’s not hyperbole, since the Civil War,” he said, turning his attention to the January 6th Capitol riot and comparing rioters to the Confederate Army. “The Confederates back then, never breached the Capitol, as insurrectionists did on January the 6th. I’m not saying this to alarm you. I’m saying this because you should be alarmed. I’m also saying this. There’s good news. It doesn’t have to be this way. It doesn’t have to be, for real. We have the names.”


Of note here is that Biden is channeling Nazi propagandist Joseph Goebbels by using the phrase “big lie” to disparage Republicans who have concerns about the 2020 election. Yet, despite the phrase’s murderous, anti-Semitic past, the president seems to have no problem saying it repeatedly. In doing so, he echoed CNN’s Jake Tapper and others who have also been fond of the phrase.

And Joseph Stalin as well:

He said the quiet part out loud again.

"It's about who gets to count the votes" pic.twitter.com/nWuVBSiIN8

We often report on how Joe Biden’s brain is breaking. Surely, it seems to break often.

But yesterday we reported on just his outright lying. Now he lies often, too. But the scope of his lying yesterday and the nature of how dangerous it was was just incredible.

The Republicans have passed election security laws in multiple states and have more in the hopper. None of those laws/bills stop anyone from voting. Not one of them has anything that is racist in them. No provision has anything at all to do with race. But Joe Biden lied his head off about those laws to whip up the base to divide America. This is the “unifier.”