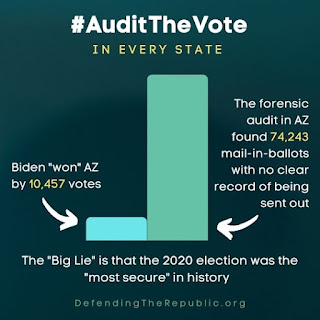 A diverse lot for a Sunday Morning. Lets start with the As, as in Arizona, where the Western Journal has an AZ Audit Exclusive: AZ Senate President Confirms Ballots Were Printed on Wrong Paper, Allowed Bleed-Through. Remember the sharpie controversy? Turns out there might be something to it:


Speaking with The Western Journal on Thursday, Arizona State President Karen Fann confirmed that a number of ballots in the 2020 election were indeed printed on the wrong paper, allowing bleed-through which then invalidated those ballots. During a broadcasted state Senate hearing held on July 15 regarding the Maricopa County presidential election audit, Arizona senators revealed as much.
. . .
“For example, we can go back to an actual public document that [Maricopa County officials] had on their website and they put out there and said, ‘We only use four types of paper for our ballots,’ and those ballots are — it’s a special kind of paper that has, I believe, it’s a titanium film on it, if you will, which actually prevent people from — from the ballots, from seeping through on the other side,” Fann told The Western Journal.

“Well, we know for a fact from the hearing last Thursday that there is a lot of ballots out there that they marked through, and images of them. So clearly, that was misinformation when they said we only use four types of paper.”

During the July 15 hearing, images were provided showing that some ballots did suffer bleed-through which, if the proper VoteSecure paper had been used, should have been impossible. According to Fann, Senate Republicans have affidavits from poll workers confirming that some polls “were not using any special paper.”

“As a matter of fact, if they ran out of paper, somebody was sent down to the nearest office supply store to pick up more paper. So that in itself is, okay, obviously, that’s not secure paper. Obviously, you’re going to have bleed-throughs,” Fann told The Western Journal.

So here's the trick. A ballot marked with a sharpie bleeds through, and then the machine refuses to read it, and the ballot goes on to "adjudication" where a county employee is free to decide who the vote was intended for. It's no secret that most county employees are Democrats. Were votes changed in adjudication? Only a comparison of the original ballots and the "adjudicated" ballots can tell. Guess who's resisting that comparison. 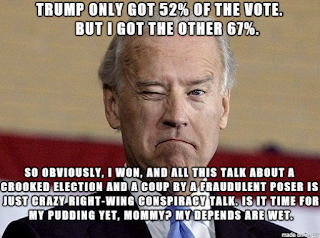 Sundance at CTH reports (and has the vid) that Perfect – Arizona GOP Senator Michelle Ugenti-Rita, Who Killed Election Reform Bill, Destroyed by Audience, Booed and Run Off Stage "We need more of this!" Well, as they say, votes have consequences. And from PM, Trump targets Biden, Democrats and 2020 election at packed Phoenix rally

At Breitbart, Rep. Byron Donalds Shreds Democrat Argument on Voter ID: I Had an ID at 13, but via Fox, Pennsylvania Lt. Gov. says voter ID requirements 'insidious' in talk with fleeing Texas Dems. 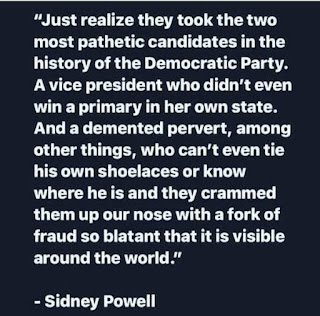 Speaking of the plague bearing Texas Fleebaggers, at Hot Hair, Karen Townsend reports Texas Democrats unravel - "I'm just pissed off" that Biden won't meet with them. Well, he's vaccinated, right? And again from Fox, Psaki refuses to give number of breakthrough WH Covid cases: 'Why do you need that information?' To embarrass you, thanks very much!


CNN claims Bumble match turns in January 6 suspect who allegedly whipped police. If he really whipped police, put him in jail, but like all CNN news stories, I take that accusation with a grain of salt. Video, or it didn't happen. Michael Walsh at NYPo, The FBI is made of snitches, often trapping Americans into committing crimes. I think we'll find many undercover FBI agents and snitches participated in Jan, 6.

PM, NSA confirmed to have 'unmasked' Tucker Carlson in surveilled communications, "An NSA review confirms Tucker Carlson was unmasked in communications between two third-parties." And then leaked, which is how it got to Carlson, and other media figures. And speaking of Carlson, from Da Caller, ‘Settle Down, Son’: Tucker Carlson Laughs In Face Of Heckler Who Calls Him ‘Worst Human Being’ and Althouse reports The Lincoln Project celebrates intrusive rudeness by hailing the heckler. I guess it was Tucker's day to be Immanuel Goldstein. 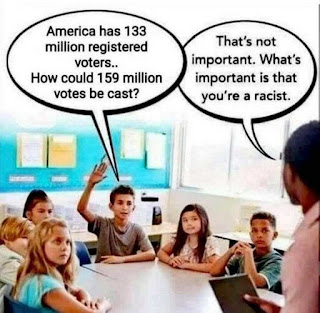 Greene tweeted both Sunday and Monday that COVID-19 was not dangerous for individuals unless they were above the age of 65 and obese, The New York Times (NYT) reported. Greene also argued that “defeating obesity” would help fight the virus and that vaccines should not be mandated, according to The Hill. 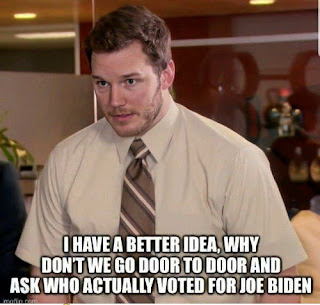 Indeed, a bit of an overstatement, but that wouldn't get a lib banned. At NYPo Ben Shapiro thinks America’s silent majority must fight liberals killing freedom of speech. Quitting Twitter and Facebook would be a start. Da Beast is apparently happy that Even Dershowitz Took a Pass on Trump’s Big Tech Suit. Even if the fight is doomed, it's worth making the point. It's how the libs do it; keep hammering until they give in.
After her accepting the appointment to Nancy Pelosi's Jan. 6 Star Chamber, Newsmax is thrilled that Ad Brands Liz Cheney a 'Clinton Republican'. Much like Hillary she owes her political success to a male relative, not to her own innate skill at politician.
Posted by Fritz at 10:49 AM