From Arizona, Via the Wombat's In The Mailbox: 07.16.21  Nice Deb at Am Great, Arizona Audit Finds Massive Irregularities, Including More Than 74,000 Mail-In Ballots Counted Than Mailed Out, but at Twitchy, Maricopa County disputes the claim made by the #AZAudit and Trump that 74,000 more mail-in ballots were counted than sent.Behind the Black finds Arizona election audit uncovers more evidence of malfeasance in November 2020 election. Dan Payne at JTN hears Arizona election auditor say 'Critically important' investigators get access to Maricopa County routers. What are they trying to hide? Apparently, they stopped counting ballots sent out. Both AllahPundit and Jazz Shaw at Hot Hair were hot on the case of AP: County officials identified fewer than 200 cases of possible voter fraud in Arizona, only four of which were charged and Arizona election audit finds hundreds (not thousands) of cases of voter fraud. But be aware, this is not the controversial Maricopa audit, these are the other counties self-reporting fraud, usually piecemeal stuff of people voting for dead relatives etc. Regarding that Maricopa audit, sundance sends Liz Harrington and Kelli Ward Discuss the Preliminary Results from Maricopa County Ballot Audit

At JTN, Wisconsin next? GOP lawmaker asks for forensic audit of 2020 election.   From the Wombat's In The Mailbox: 07.16.21, Regardless of the audits, George Walsh at Am Think thinks Forget about Booting Biden. 'Fraid so.

So bouncing Biden before 2024 isn't happening. This may not be a bad thing. Biden isn't the real threat to the Republic. The real threat is the network of local politicians who rig elections, national leaders who pay for the rigging, and the Democrat-controlled media who refuse to report the truth to the American people.

Biden doesn't control these people. They control him. Bouncing Biden while leaving the network intact doesn't solve the problem. Dismantling the corrupt network that gave us President Biden is what solves the problem. (Not that we're letting Joe Biden off the hook. A republican Congress can release the contents of Hunter Biden's laptop and take other actions to bring old Joe to justice.)

Matt Margolis at PJ Media, 2020 Fallout: Voters Want Tighter Voting Restrictions. Damn populists. Jeffrey Lord at Am Spec explains how Biden Stands Up for Voter Suppression "And, of course, plays the race card." At Fox, Hans von Spakovsky calls out  The Big Lie about Texas and other states' election reforms "Contrary to Joe Biden's outrageous charges, states are acting to protect all of their voters and guarantee safe and secure elections." Why doesn't Joe Biden want safe and secure elections?

Scrutiny, stress, and secrecy? They're tweeting pictures of their underwear. pic.twitter.com/w4xmgqbLDQ

From PM, Psaki doubles down on Biden's plan to monitor and censor Americans' social media. Ace, Jen Psaki: Tech Monopolies Should Act as a Coordinated Cartel To Ban People Across All Platforms, BIDEN DOUBLES DOWN ON DEMAND FOR CARTEL-WIDE CENSORSHIP, TELLING MONPOLIES "THEY'RE KILLING PEOPLE" BY NOT DEPLATFORMING MORE. Jim Treacher on Substack, The Biden Administration Will Decide What You Can and Cannot Say, but only on all the major social media. As AllahPundit happily quotes Jen Psaki: If you're banned by one social media platform for disinformation, you should be banned by others. Sundance at CTH, Regime Spokesperson Very Defensive About Americans Knowing the White House is Reviewing Their Social Media and Now Recommending Bans From Platforms "Fox News journalist Peter Ducey asked the regime to name the 12 people on Facebook the White House has identified as problematic for the interests of the state; however, the spokesperson refused to name them, obviously and transparently fearing a lawsuit " and hosts Glenn Greenwald Discusses Admission of White House Directing Opposition Censorship Through Big Tech. Fox video, so I assume it will be taken down. Twitchy, Attn. media! @redsteeze reminds us where the censorship push began (Spoiler: NOTHING to do with Covid misinformation) Second spoiler, Hunter Biden's laptop.Western Journal, Sen. Hawley Sends Scathing Message to Twitter and Facebook CEOs After 'Shocking' Admission of Collusion with Biden Admin, and at Da Caller, House Republicans Launch ‘Freedom From Big Tech Caucus’

All of this goes back to 2016. These people believe in their bones that Trump was only elected because of “misinformation”. Their solution is to rig the platforms instead of ask why so many millions lost trust in all our institutions in the first place https://t.co/2HMudG7EN3

More on how Gen. Mark Milley Allegedly Had Fears of Trump Coup, Called it a ‘Reichstag Moment’ and  MSNBC’s McCaffrey: Trump ‘Was Edging Towards a Coup’ Like 1930s Nazis (Breitbart). Drama queens. From the Wombat's In The Mailbox: 07.16.21 Da Lid Jeff Dunetz thinks  JCS Chairman Milley Disgraced His Uniform while at Am Think, Andrea Widburg thinks The chairman of the Joint Chiefs of Staff is straight out of Dr. Strangelove. From PM, Tucker Carlson asks why is lunatic wokester Mark Milley still in command of the US military? From the Wombat's In The Mailbox: 07.16.21,Twitchy has Juanita Broaddrick Uses Left’s Favorite Anti-Trump Talking Point To Drop Gen. Milley. -> 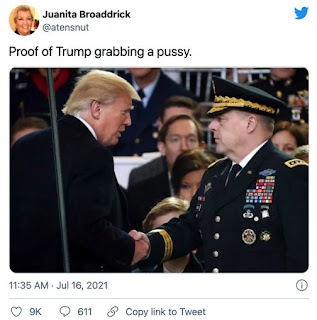 On the Jan. 6 kerfuffle, from the Wombat's In The Mailbox: 07.16.21,The Geller Report reports FBI Director, Agents, & Bureau To Be Sued For Gestapo Tactics In January 6 Crackdown. Eric Lendrum at Am Great tells us Partisan January 6th Committee to Hold First Hearing, making star chambers and kangaroo courts everywhere look good. Julie Kelly at Am Great is still on the case of The Capitol Cover Up, "Release the tapes. Release the name of Ashli Babbitt’s shooter. And release Joe Biden’s political prisoners." Da Caller calls from  Inside The Re-Education Program One Lawyer Is Teaching To Capitol Rioters. Breitbart, Capitol Police to Use Same Surveillance Equipment Troops Used Against Terrorists in Iraq, Afghanistan, because the Harris/Biden administration thinks of them as equal threats.

And speaking of insurrection, At the Independent Chronicle, Thomas McDonald tells how the Chair of Congressional Black Caucus arrested for storming Senate building in protest of filibuster. Breitbart, Democrat Joyce Beatty Arrested by Capitol Police After Leading Protest in Hart Senate Building.
Spencer Brown at Town Hall, The Feds Delayed Action on Hunter Biden's Taxes and Now We Know Why and sundance gives the spoiler, Delaware US Attorney Blocked Hunter Biden Warrants and Subpoenas in Order to Protect the Joe Biden 2020 Election Effort. Ace, in all red caps with flaming skull, ANOTHER DEEP STATE COVER UP: US ATTORNEY KEPT CRIMINAL PROBE OF HUNTER BIDEN SECRET FOR A YEAR, TO AVOID HURTING JOE BIDEN'S POLITICAL FORTUNES
Posted by Fritz at 11:30 AM