We saw this exact same strategy play out in Wisconsin circa 2011 when the Democrats in state legislature fled the state to avoid showing up to a legislative session. They left the state specifically to avoid state police arresting them and forcibly returning them to work. This is how Democrats operate.

In Texas the milk-carton Democrats do not have the numbers to block legislation; however, they can deny a legislative quorum by not showing up to work. The Democrats took buses to a private airport where they took private charter flights to Washington DC; all of their manipulative schemes paid for by Democrat activist groups. The cases of beer on the seats is a nice touch.

Meanwhile, Texas citizens are paying taxes to fund the salaries of officials who refuse to come to work.

Karen Townsend at Hot Hair,  More Texas Legislature drama: Democrats decide to flee to welcoming arms in D.C.. Breitbart looks to the past, ‘Fleebaggers’: A History of Democrats Running Away to Deny a Quorum. Tyler O'Neil at PJ Media, PEACE OUT: Texas Dems Vote With Their Feet... for a Federal Takeover of Election Law. Nick Arama at Red State, Kamala Should Get All the Pinocchios for Description of Runaway Texas Dems

“I applaud them standing for the rights of all Americans and all Texans to express their voice through their vote, unencumbered.” 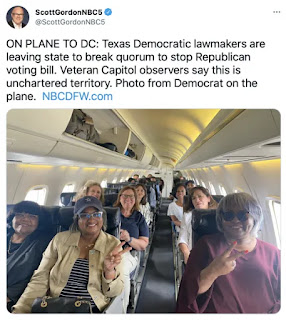 At the minimum, should that be "fleeing for the rights"? AllahPundit at Hot Hair noted No masks on plane for Texas Dems as they flee the state to block new voting bill, in violation of current FAA regs. Insty,
UNDERMINING DEMOCRACY AND VIOLATING FEDERAL MASK REGULATIONS IN ONE PHOTO. At Twitchy, More Failings of the Texas Dems Flee-ibuster: State Reps delete tweet of their cheerful departure with a case of beer (we caught it).

Don’t misunderstand, we are in full agreement — just not with the selection. Miller Lite?!?! Here is a troupe posturing that they are representing Texans, and they do not even take texas beers with them.

They could have at least grabbed a case of Shiner Light Blonde.

“Once they step back into the State of Texas, they will be arrested and brought to the Texas Capitol and we will be conducting business.” That is what Texas Governor Greg Abbott said to FNC’s Laura Ingraham last night about the state Democrat lawmakers who fled rather than maintain a quorum in the Texas House of Representatives. Democrats are using their flight from the state as a filibuster against moving forward in the special session with an election integrity bill.

"On Election Day and afterwards, our Office received various allegations of voter fraud and election irregularities," the letter said. "As part of my responsibilities as U.S. Attorney, I wanted to be transparent with the public and, of course, investigate fully any allegations. Attorney General Barr, however, instructed me not to make any public statements or put out any press releases regarding possible election irregularities. I was also given a directive to pass along serious allegations to the State Attorney General for investigation — the same State Attorney General who had already declared that you could not win."

McSwain wrote that he "disagreed with that decision" but noted he had been a Marine infantry officer, so he would follow orders from his superior even if he did not agree with them.

Sundance at CTH, Wow, It was McSwain – President Trump Releases US Attorney Letter Notifying Him of Bill Barr Efforts to Block Investigation of Election Fraud. So, Barr actively blocked McSwains attempts to investigate reported election irregularities in Pennsylvania, and then claimed  ” To date, we have not seen fraud on a scale that could have effected a different outcome in the election.” There are none so blind . . .
Jack Phillips at ET, Texas Now Investigating 386 More Cases of Voter Fraud, Attorney General Tells CPAC. Paula Bolyard at PJ Media, Donna Brazile Doesn't Understand Why It's 'Criminal' to Violate Election Laws

Here’s what former interim DNC chair Donna Brazile said on ABC “This Week” on Sunday: “I’m an election official, ok? And if I began to give people access to the ballot through online applications for absentee ballots, I can be arrested. It’s criminalizing voting in ways we should not criminalize voting.”

Well, yes. If you break the law, you’re a criminal. This is not complicated. If you violate election laws passed by the duly elected legislature, what you’re doing is illegal. No one should have the power to unilaterally change election laws, although several governors and secretaries of state did in 2020—illegally, in my opinion—citing COVID concerns.

Via Wombats' In The Mailbox: 07.12.21, Margot Cleveland at Da Fed says Ignoring Georgia Illegal Voting Proves Democrats Don’t Care About Election Integrity At All, but  Stephen Kruiser at PJ Media goes further, and I think, gets closer to the truth, Democrats Want All Elections to Be Lawless Fraud-Fests "Of course, chaos and an election riddled with irregularities worked out well for them last year, so one can see why they’d like that to be the norm. That’s what H.R. 1 is all about." At Ace's, Dave in Fla has an interesting analysis in 81 Million Votes

Now you be honest. If the week before the election, you had been told with certitude that Trump would increase his vote total over 2016 by 11,231,329 votes, would you have believed that he could lose? While I didn’t know the exact number, I was tracking this enthusiasm surge, which is why I discounted the magnitude of fraud possible.

There is no question that Joe Biden is not a charismatic candidate. He inspired enthusiasm in only those who were going to vote Democrat regardless of the candidate. Attendance at his rallies could be counted on two hands, a phenomenon that continues today, despite being President.

This makes Trump the most unique candidate in political history, worldwide. To accept the official narrative of the 2020 election, we must accept that Donald Trump was the singular motivator to convince 26,616,737 new voters, a 21% increase over 2016, to turn out to vote. In the middle of a pandemic where everyone was locked in their homes.

Worse, there are models. And as they say, all models are wrong, but some models are useful.

By way of the Wombats' In The Mailbox: 07.12.21, At Da Lid, K. Walker dissects (in a good way) the Epic Twitter Thread that Gives a Perfect Primer On Why MAGA Folks Doubt 2020 Election Results. At the Slantic, Trump’s Revenge Begins in Georgia "In standing up to Donald Trump, Secretary of State Brad Raffensperger likely sacrificed a second term." while Bulwark Girlz Amanda Carpenter whines about The Real Point of the Arizona Audit. 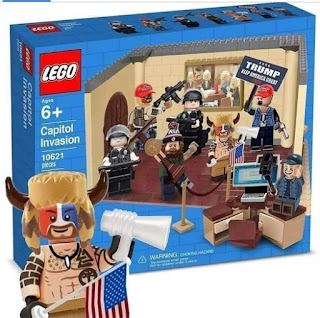 The asshole, Matthew Rozsa at Salon, claims Ashli Babbitt is the 21st-century Horst Wessel: Symbolic martyr to the fascist cause "Trump's followers are trying to turn Babbitt into their movement's martyr: All she needs now is a hit song," meanwhile, from ET, DOJ Retracts Claim It Seized ‘Fully Constructed’ Lego Set From Accused Capitol Rioter. At Ace's Morning Rant, the Big Monkey says THEY GOT NOTHING. Lying liars who lie without consequence. At Fox, Liz Peek opines Pelosi, Democrats need Trump – Jan. 6 commission created for this one reason. Is Trump the ultimate Immanuel Goldstein? American Military News reveals Capitol Police to use Army surveillance gear to monitor Americans and ‘identify emerging threats’ The militarization and criminalization of US politics under the Biden/Harris administration continues apace.

The NYT (cited at Hot Hair) thinks Trump suits against Big Tech face steep First Amendment hurdles, but at the WSJ Vivek Ramaswamy opines Trump Can Win His Case Against Tech Giants. I hope so, but I fear not. Charles Glasser at Insty, GOOD IDEA, BUT BAD EXECUTION:

JustTheNews has a report about Wisconsin state Sen. Julian Bradley (R-Franklin) proposing a new piece of legislation that would force the tech companies to show their algorithms and explain the policies that decide who gets blocked and who gets to post freely.

I’m all for it in concept, but Bradley makes in part, a fundamental error in saying:

“Bradley is quick to point out that judges have ruled lawmakers and other elected officials cannot block or ban people from commenting on their posts, even if those comments are negative or ugly. The courts have ruled, essentially, that social media is the new public town hall and some online speech is protected.”

Bradley’s error is reading the caselaw a little too broadly. The courts have not ruled essentially, that “social media is the new public town hall.” What they have ruled is that when public officials (be they Trump or AOC) use these platforms, their accounts are “official” government business and Freedom of Information or “Government in the Sunshine” laws, as well as the First Amendment prohibit blocking any segment of the public from reading those communiques. That’s not the same as declaring social media a “public square.”

Unless and until Congress drafts a law (or the Supreme Court rules, I suppose) declaring these platforms a “public square” the Tech Barons will still have filtering control. Given the current make-up of Congress, it inures to the Dems’ benefit to keep letting their donor Tech Barons filter out contrarian voices, so I would not look for this kind of law soon. For the record, I do think these platforms are already a de facto public square.

From ET, at CPAC: Richard Grenell Urges Federal Action Over Alleged ‘Unmasking’ of Tucker Carlson. Insty, FASTER, PLEASE: Rand Paul Sends Letter to the NSA Demanding an Investigation on the Spying and Unmasking of Tucker Carlson. Related: Tucker Carlson Gets Contacted by Brian Stelter and Pure Savagery Follows. Yeah, I'm sure the Biden/Harris administration will get right on that. /sarc