There's really only one story today, and lots of discussion. Gen. Flynn's lawyers were allowed to release a small bit of lightly redacted documents that show a discussion among what was to become the Crossfire Hurricane team of just what they hoped to accomplish in their ambush interview of Gen. Flynn. Below is a hand written note, who Sidney Powell, Flynn's lawyer claims not to know the authorship of, but is thought to be William Priestap, then head Counter Intelligence at Comey's FBI. The original being passed around is dull and blurry, so I've increase the contrast, and sharpened the image. The money shot: 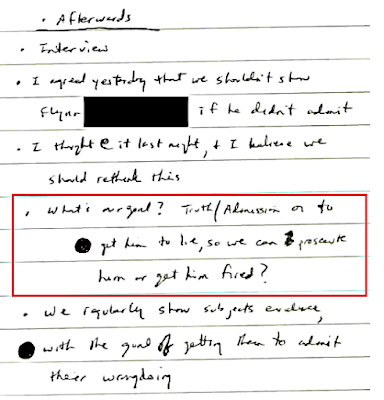 The red box highlights "what is our goal? Truth/Admission or go get him to lies so we can prosecute him or get him fired."

Remember, Comey has admitted in public to "just sending a couple of agents" to interview Flynn in the chaos of a new administration, so even if he wasn't at the meeting, he was clearly a co-conspirator. And remember, Andy McCabe, then Comey's Deputy Dawg, has a long standing grudge against Flynn over Flynn's support of an FBI agent who accused McCabe of sexual discrimination.

Desparately trying to be give the appearance of being fair, CNN, Handwritten note shows how FBI official approached key Michael Flynn interview


They also provide an unusual assist to the Flynn defense team that could serve to undermine the department's own case, one of the major accomplishments of former special counsel Robert Mueller's investigation.

While Flynn's legal team has alleged the Justice Department and FBI wrongfully targeted Flynn, the Justice Department in court has defended the handling of the case.
. . .Greg Brower, a former US attorney and the FBI's chief congressional liaison until 2018, said that without the context around the notes, it's hard to assign any deeper meaning to them.

"To the extent this is being advertised as evidence of something nefarious, I certainly don't see it in that way," Brower said. "I don't know what this means and I don't know that it's important at all."

In Sidney Powell Discusses the Latest FBI Documents in The Flynn Case…, sundance at CTH cautions


A few notes of caution. Don’t fall into the outrage trap; the DOJ will certainly justify the FBI notes as a valid discussion on investigative strategy, nothing more.

Second, Bill Barr did not appoint Missouri Attorney Jensen in an effort to support General Flynn. AG Barr was ordered by the FISA court to review every case and all evidence that touched upon the fraudulent Carter Page FISA application. Be careful about projecting a motive onto Bill Barr around these revelations. Without that FISC ordered sequestration review order; the DOJ/FBI may not have moved on this.

Lastly, despite the known corruption within the existing FBI leadership {outlined here}, and we can now add the FBI hiding these documents for 3 years, AG Bill Barr continues to pour effusive praise upon the FBI. That reality doesn’t reconcile with a good intent.


And with caution over, cue the outrage:

Sundace at CTH, Flynn Defense Gets More DOJ Documents – Previously Within Mueller Files?… and FBI Notes Released – Show Plan to Frame Michael Flynn For “Logan Act” Violation and/or “Lying” About It – With Goal For Removal…


Sidney Powell 🇺🇸⭐⭐⭐ on Twitter: "While we await Judge Sullivan's order to unseal the exhibits from Friday, the government has just provided 11 more pages even more appalling that the Friday production. We have requested the redaction process begin immediately. @GenFlynn@BarbaraRedgate https://t.co/YPEjZWbdvo" / Twitter

Fox News, FBI discussed interviewing Michael Flynn 'to get him to lie' and 'get him fired,' handwritten notes show | Fox News

Ace, Revealed Notes from Flynn Trap: "Get Him to Lie, So We Can Prosecute Or Get Him Fired"

Twitchy, Unsealed FBI notes ask what the goal is of interviewing Michael Flynn: ‘… to get him to lie, so we can prosecute’?

John Solomon at JTN, FBI notes detail effort to catch Flynn in lie to 'get him fired' as Trump adviser | Just The News and Download and read the explosive FBI Russia case notes turned over to Michael Flynn's defense | Just The News

Twitchy, Donald Trump Jr. is almost on board with Dan Bongino’s list of things that need to happen in light of those unsealed FBI notes on Michael Flynn

3 things need to happen, STAT!
1) Flynn must be pardoned
2) Comey, McCabe, Yates, McCord, Strzok, & Pientka MUST be investigated for their roles in this scandal.
3) Mueller & Weissmann should be hauled in front of a Senate committee to testify for their role in this abomination https://t.co/NUgWtHy4NF
— Dan Bongino (@dbongino) April 29, 2020

But beyond the Flynn affair, RCP, The NY Times Used to Correct Its Whoppers. But Not These Two. Here's Why.  Just think of them as an arm of the DNC and you won't go wrong. Streiff at Red State, Washington Post Runs a Debunked Conspiracy Story for the Sole Purpose of Trying to Damage President Trump. The same reporters who were pushing Russiagate lies, are pushing WuFlu lies, that President Trump was warned of the pandemic in Jan. and Feb.


FBI documents made public Tuesday, show that Roger Stone, shortly after the Mueller Russia collusion investigation began, communicated to Julian Assange, telling the Wikileaks founder that he would step in if prosecutors came after Assange.

“I will bring down the entire house of cards,” wrote Stone to Assange in a private Twitter message.

“As a journalist it doesn’t matter where you get information only that it is accurate and authentic,” Stone told Assange in a message from the summer of 2017.

“Between CIA and DoJ they’re doing quite a lot. On the DoJ side that’s coming most strongly from those obsessed with taking down Trump trying to squeeze us into a deal,” responded Assange.

Assange, who was at the time hiding out in the Ecuadorian Embassy in London, is now in prison in England, fighting an attempt to extradite him to the United States. Last year the Justice Department charged him with a variety of crimes, including violating the Espionage Act when he allegedly instructed Chelsea Manning in a massive leak of classified government information.

I don't see a crime there, but I do see a motive for the FBI thugs to take him down.
Posted by Fritz at 9:26 AM