Stacy McCain considers the geographic correlation between WuFlu and Democrat control of an area, using MD as an object lesson: COVID-19: The Democrat Disease


Part of the developing liberal media narrative about COVID-19 pandemic is that black people are disproportionately impacted by the disease. The usual explanation for this is that black people have more “underlying conditions” — heart disease, Type II diabetes, etc. — that so often make the difference between having a mild case of coronavirus and having a serious case that might kill you. What goes unmentioned in such explanations is that black people are also disproportionately likely to live in high-density urban areas and to use public transportation. Why do you think New York City became such a death trap in this pandemic? Millions of people ride the subway there every day, and the city’s population density is the highest in America. Because urban life is also highly correlated with voting Democrat, the Chinese virus also has a partisan bias. Republican voters tend to live in suburbs, small towns and rural areas, regions where the COVID-19 infection rate is lower. A “stay-at-home” order will help reduce the spread of a contagious disease far more effectively if you live in a single-family home than if you live in a crowded apartment complex, and so the residential patterns of Democrats are part of the risk patterns that have political consequences.

Consider the case of Maryland. The state has long been deep “blue,” with two Democratic senators, seven of eight House seats controlled by Democrats (“one of the most gerrymandered states in the country”), and Democrats dominating the state legislature by a 2-to-1 margin. Nevertheless, in 2014, Maryland elected Republican Larry Hogan as governor and he has been so successful that, in 2018 — a terrible mid-term election for the GOP — Hogan was re-elected by a 12-point margin over former NAACP president Ben Jealous. If you look at the map of that 2018 election, you’ll see that the county with the largest margin for Jealous was Prince George’s. This is a D.C. suburb where the population is 65% black, the population density is 1,700 per square mile, and the Democrat got 71%, with 225,889 votes to Hogan’s 89,925. Compare that to Washington County, in the state’s western panhandle, where the population is about 10% black, the population density is 320 per square mile, and Hogan got 77%, with 38,765 votes to Jealous’s 10,894.

Based on what we know about the pattern of COVID-19 infections, what would you deduce about its impact in these two counties? As of Saturday, these were the county coronavirus numbers for Maryland:

As you can see, Prince George’s County had the most coronavirus cases (1,923) and the most deaths (50) of any jurisdiction in Maryland, while Washington County was near the low end, with only 72 known COVID-19 cases, and only one death. Here is a further analysis:

Note, I suspect the fourth line of those should read  COVID-19 cases deaths (per 100,000 residents).


So, the per-capita rate of COVID-19 cases in Prince George’s County is roughly 4.4 times higher than in Washington County, and death rate in Prince George’s County is nearly eight times higher. This remarkable differential is not a result of politics, nor can it be blamed on racism. Rather, the coronavirus infection rate reflects differences in lifestyle — e.g., urban vs. rural — that are also reflected in the partisan preferences of communities. This data is subject to misinterpretation, of course. The liberal media want to blame the disproportionate impact on the black community on racism and poverty, even though Prince George’s County “is the wealthiest African American-majority county in the United States,” and has a substantially higher median household income ($71,696) than majority-white Washington County ($52,994).

Let’s be clear: Nobody is “safe” from COVID-19. Being white or living in a rural area doesn’t make you immune to this disease, and the virus doesn’t care which party you vote for. However, risk is always a matter of statistical probability, and because the Democratic coalition is so heavily skewed toward urban voters, the outbreak of a contagious disease that spreads most rapidly in high-density communities with public transportation means that Democratic voters are most at risk.

As of the last update, the numbers for Calvert County are 90 (1). Calvert is somewhere in between PG and Washington. 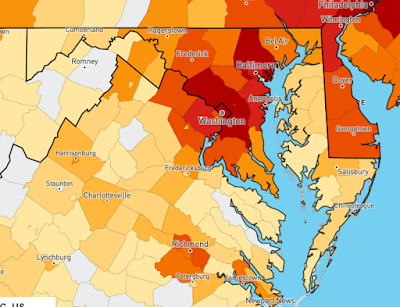 We in the more rural counties already enjoyed what most urban residents resent deeply; social distancing. The "shutdown" hasn't affected our lives very much. The dog still needs to be walked, the beach is still there. The governor won't let me go fishing for some reason, but they shut down catch and release fishing for stripers before the WuFlu crisis anyway. We go to the store less often, and we wash our hands a lot. The virus is in the countryside for sure, but it doesn't move nearly as fast as it does in the urban areas.

Were Broadway shows and a deli within walking distance, worth being packed cheek to jowl on public transportation and a much more rapid development of the WuFlu.