WuFlu - The Good News and the Bad News

First the good news, via Insty, 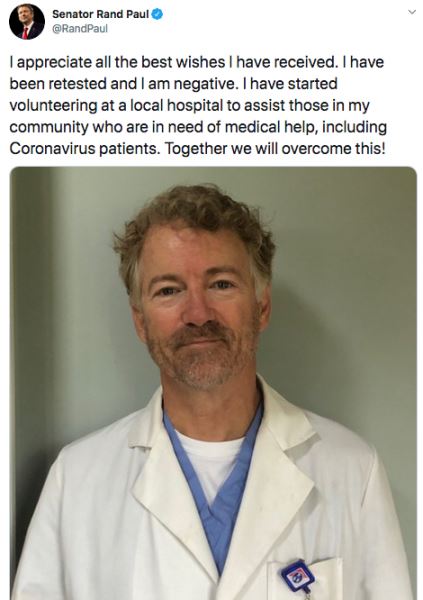 Of course, there's always an asshole.

And then the bad news, John Prine, One of America’s Greatest Songwriters, Dead at 73 ,Grammy-winning singer who combined literary genius with a common touch succumbs to coronavirus complications

I hope you're enjoying that cocktail and 9 mile long cigarette.

And models, we have models! We watch WuFlu models like we watch the stock market. Are they going up or down today? According to Madeline Osburn at Da Fed, Inaccurate Virus Models Are Panicking Officials Into Ill-Advised Lockdowns. AllahPundit at Hot Air, CDC Chief: The Actual Death Toll Could Be “Much, Much, Much, Much Lower” Than The WH Model, Thanks To Social Distancing, which has Allah doubting again. If so, good, but could it be that the models are wrong? Wait, all models are wrong, but some models are useful. WaFreeBee, A Popular COVID-19 Model Just Got Rosier. Don’t Read Too Much Into It


The designers of a widely cited model of U.S. COVID-19 deaths announced Monday that they expect the deadly virus to kill just 81,000 Americans, a substantial decline from previous projections.

The model, built by the Institute for Health Metrics and Evaluation at the University of Washington, offers an increasingly rosy picture of the pandemic, with its latest revision cutting projected deaths by over 10,000. The new figure is below even the White House's smallest projection and is much more optimistic than other models projecting deaths into the millions.

While the federal government has pointed to the IHME model as guiding its decision-making, many state and local executives remain unconvinced of these optimistic projections. Washington, D.C., mayor Muriel Bowser, for example, has opted to ignore the IHME model—which assumes that resource-use has already peaked—for a different model projecting peak infections in July.

Meanwhile, women and children hurt worst as In NYC, Coronavirus Is Killing Men Twice As Often As Women (NYT cited in Hot Air). This is my shocked face. WaPoo drags race into it too, with Virus infecting, killing black Americans at alarmingly high rate, Post analysis shows. Of course; they live predominantly in the packed inner cities where the transmission is fast, and tend not to take care of themselves, and have high rates of the sort of things that contribute to WuFlu deaths, obesity, diabetes, high blood pressure and smoking.

Jazz Shaw reports that "Death Panels" are being set up in Taxachussetts Massachusetts Issues Guidelines To “Prioritize” Who Will Be Saved. Do they check political party?


Tyler O'Neil at PJ Media, Trump: Schiff's New Partisan Investigation Amid a Pandemic Will Just 'Build Up My Poll Numbers'

From sundance at CTH, Anatomy of a Smear – Administrative State Agents Coordinating with Media Resistance Operatives…

♦Step Two – Instead of delivering her survey to the coronavirus task force members, including Assistant Secretary for HHS Admiral Brett Giroir, Ms. Grimm gave preliminary and incomplete results of her survey to allied members of the resistance media. This decision clearly outlines the motives and intentions of HHS IG Christi Grimm as an ally of the deep administrative state.

♦Step Three – The current president of the White House Correspondents Association, ABC News Jonathan Karl, coordinates questions from the press pool based on Ms. Grimm’s incomplete and leaked report. This is the set-up to create the narrative by ambushing the Trump administration with questions. Some within the press pool could see the set-up taking place. It also appears that Dr. Fauci was aware of the objective. WATCH:

Watch the video all the way through. It’s important to have a full understanding:

I'm not yet willing to condemn Fauci over this. He's a 79 year old man doing the best he can to save us from this. Mistakes will be made.


The New York Times has issued several corrections regarding an article published two weeks ago insisting Attkisson was a “coronavirus doubter.”

After the article was published, Attkisson and her lawyers sent a letter to the Times demanding they correct their story or face a defamation lawsuit. The Times article was about five people, including Jerry Falwell Jr. and Dr. Drew, who doubted the severity of the coronavirus. As Attkisson’s attorneys stated in their letter, the Times’ article included “false and defamatory” statements regarding the ex-CBS journalist’s reporting on the coronavirus.

“Through a combination of discrete statements of fact, the defamatory headline, and the juxtaposition of defamatory statements concerning a small group of individuals with whom you have lumped Ms. Attkisson, the article conveys the false and defamatory gist that my client, among other things, lied to her readers and listeners, reported as fact lies that endanger the lives of the public, and otherwise violated the litany of ethical standards by which responsible journalists conduct themselves,” wrote Attkisson’s attorney G. Taylor Wilson of Wade, Grunberg & Wilson, LLC.

As The Daily Wire reported previously, the letter included 10 examples from the Times article that defamed Attkisson:
. . .
On April 1, the Times issued a correction to the article and changed the language surrounding Attkisson. The correction reads:


An earlier version of this article referred imprecisely to statements made by Sharyl Attkisson. Ms. Attkisson accurately reported the number and location of U.S. coronavirus deaths, as of the date of her March 13 podcast. Separately, a reference to advertisements for protective masks that appeared on Ms. Attkisson’s website has been removed.

Attkisson wrote on her personal website that before her attorneys sent the letter, she contacted Times editor Carolyn Ryan about the needed changes, reporting her complaints were dismissed. Attkisson said: “Ryan defended the article by saying that because I had reported on coronavirus deaths– in a way The Times acknowledges was perfectly accurate– readers could somehow be misled into believing they were not at much risk if they were not in a high risk group.”

"Referred imprecisely" certainly is an interesting new euphemism for lied.