And what it is ain't exactly clear. WuFlu continues to throw out some amazing numbers. From Axios, 96% of nearly 3,300 inmates with coronavirus were asymptomatic, survey shows

96% of 3,277 inmates in state prison systems in Arkansas, North Carolina, Ohio and Virginia who tested positive for the coronavirus did not show symptoms, Reuters reports.

Why it matters: The findings suggest that asymptomatic patients could be contributing to the spread of the virus at a far higher level than suspected, especially in prisons, which have proven to be a breeding ground for COVID-19 in the U.S.
The big picture: Two prisons — Marion Correctional Institute in Ohio and Chicago's Cook County jail — are among the largest known sources of coronavirus infections in the U.S.


Astonishing if true. I suppose it's possible that testing caught the beginnings of raging epidemics in the four prisons. In a week or two, we'll find out since symptoms usually surface after 1-2 weeks, if they surface at all. AllahPundit has some more details at Hot Air in Study Of Infected Prison Inmates In Four States Finds … 96% Are Asymptomatic


Also mind-boggling is the number of prisoners who’ve tested positive, period. At the Marion Correctional Institution in Ohio, 88 percent of the population was infected. At prisons in Michigan and North Carolina, well over half of those tested were positive. Across prison systems in four states, per the numbers provided below, 70 percent had COVID-19. The virus is spreading through these facilities like wildfire — but without much of a human toll, thankfully. If you’re still clinging to the Oxford model’s theory that much of the world has already been infected without knowing it despite the discouraging news from NYC a few days ago, these prison numbers are the most heartening news you’ve had in weeks.

It's also the death knell for my (and Rud Istvan's) theory that a significant majority of humanity is resistant to WuFlu because of previous coronavirus infections. Oh well, it was a nice theory. Too bad it disagreed with the new data.


Officials in Miami-Dade, one of the areas in Florida hit hardest by the virus, prompted a countywide survey to estimate the percentage of the population that has been exposed to the virus. Researchers conducted the survey over two weeks, testing roughly 1,400 individuals and estimating that six percent of the population has antibodies. Half of those who tested positive for antibodies reportedly exhibited no symptoms of the virus in the 14-17 days prior to the test.


UM researchers used statistical methods to account for the limitations of the antibody test, which is known to generate some false positive results. The researchers say they are 95% certain that the true amount of infection lies between 4.4% and 7.9% of the population, with 6% representing the best estimate.
That would mean about 165,000 estimated infections in Miami-Dade, with the margin of error equating to 123,000 residents on the low end and 221,000 residents on the high end.

Not as high as NYC at 20%+, but still a very high total considering the it is 16 X the reported cases. Will we see a blossoming of reported illness in Maimi-Dade, or is this just a sign of high levels of asymptomatic cases? Stay tuned.

Finally, at Power Line, John Hinderacker reports on attempts to evaluate the cost in lives versus the costs to the economy so far: Costs of the Shutdown (Updated)


Casey Mulligan is an economist at the University of Chicago. Per his web site, he has served as Chief Economist of the White House Council of Economic Advisers and as a visiting professor teaching public economics at Harvard and Clemson. He is affiliated with the National Bureau of Economic Research, the George J. Stigler Center for the Study of the Economy and the State, and the Population Research Center. Mulligan has set up a web page where he estimates, on a daily basis, the cumulative costs of the COVID-19 epidemic. The analysis is based on his own paper dated April 16.

This is the current chart, updated through April 24. Click to enlarge: 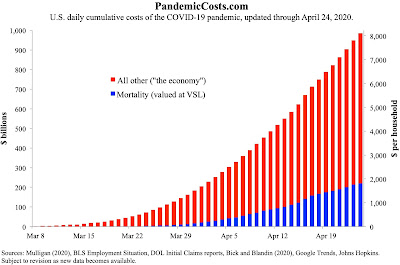 By Mulligan’s calculation, cumulative costs approach $1 trillion. This total doesn’t necessarily include stock market losses, which mostly reflect anticipated future damages that are not part of the calculation.

On its face, Mulligan’s analysis implies that the cure (shutdowns) has been far worse than the disease (mortality), and the margin is growing. Of course, doing this calculation requires an economist to put a value on the lives that have been lost to the disease. Mulligan uses a Value of a Statistical Life of $4.3 million. In his site’s FAQ, Mulligan explains:

A7. $4.3 million per death from COVID-19. This is what other economists are using and reflects only an age adjustment; a lower VSL will result when I am able to quantify the other differences between COVID-19 deaths and deaths from other causes. The point of VSL is to make comparisons the same way that individuals do in their personal lives. They do not treat all mortality risks equally, and therefore a VSL approach should not treat them equally. The VSL is proportional to income or consumption, which is much lower now (April 2020) than it was just two months ago. “People <65 years old had 34- to 73-fold lower risk than those >= 65 years old in the European countries and 13- to 15-fold lower risk in New York City, Louisiana and Michigan.” (cite from here). Co-morbidities are disproportionate among those dying from or with COVID-19.

This analysis will be a fertile source of debate, but any way one looks at it, the costs of the shutdowns are horrifying.

The last time I checked EPA calculated the value of a human life at about $6 million, but according to NPR the current government approved number is more like $10 million. Inflation. This would make the amount costs of human lives being lost, but still less than the estimated cost to the economy. Oh well, close enough for government work, I suppose. But damage to the economy will continue long after the pandemic is a memory.

It's hard to argue that the current policies have been a serious over reaction, or even a serious under reaction given these estimates. Just best guess made in a hurry with inadequate information.

As one of the age group being most protected (>65, male, somewhat obese and asthmatic) I must say I appreciate the sacrifices you all are making to help keep me alive. But I'll understand if you want to go back to work, and risk having an asymptomatic case of WuFlu. I, who have not had to change my life style all that much, will continue to practice social distancing to some extent, until the pandemic winds down.

And just how is that going locally? Well, Maryland reports 18,581 confirmed cases, which could translate anywhere from 36k to more than 200,000 cases depending on what the real rate of asymptomatic cases is, out of population of 6 millionish. So, if Marion Correctional Institution is anywhere near representative, we're nowhere near a level at which herd immunity kicks in. New cases in Maryland appear to be increasing linearly as opposed to logarithmically, at at 800-100 cases per day, with the same caveat regarding asymptomatic cases. 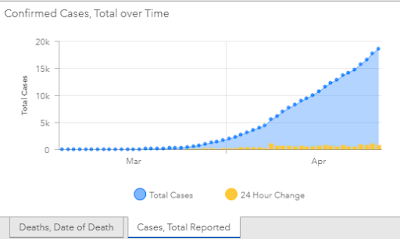 My own county of Calvert, moderately suburban, has 134 confirmed cases (and 7 deaths) out of a population of 92,000, and a rise of 3-5 cases per day. At that rate it will take for ever to get us all. I'll guess the birthrate is higher than that. And our zip code, with about 6,500 residents, has zero reported cases. At this rate, we'll never achieve "herd immunity" levels without a vaccine. It also means our risk of catching WuFlu from one of our neighbors is small.

If the idea of social distancing it to flatten the curve, to protect the ability of the health care system to take care of those who get sick, it looks like our efforts are more than sufficient in most places (It looks like they barely succeeded in NYC). If they are to prevent the majority of us from getting WuFlu before a protective vaccine is created, well, we'll see about that; but hurry up, the country needs to move again.