I Saw My First Today 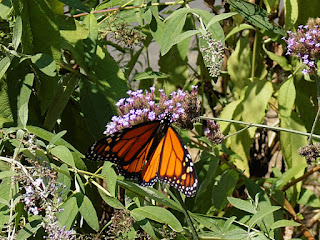 Monarch butterflies are on their way, but there are a lot fewer of them

The spring migration of monarch butterflies is moving north throughout the eastern U.S., drawing nearer to Pennsylvania, but it’s once again a relatively small migration

The butterflies are laying eggs so early in the year – something they do naturally every year – because they are part of a multi-stage migration coming in our direction. 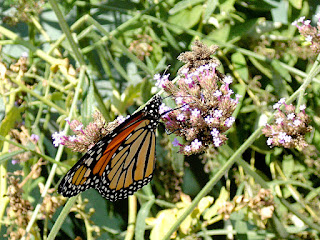 Butterflies that wintered in a few mountain in central Mexico started the migration and made it as far as the southern U.S., where they laid eggs. They’re now dying.

Their eggs will produce another generation to continue the northward migration.

The monarchs that begin arriving in Pennsylvania in mid-May are second and third generation butterflies, and it might take another generation or two for those that are heading back to eastern Canada.

I saw one at the beach today, searching for flower, or maybe even a wet patch of dirt. It was pretty beat up, and likely a migrant from the south.

At this point, I've seen and identified 12 different species of butterflies this year. There's a whole grout of species that seem to show up early.
Posted by Fritz at 7:19 PM