A little WuFlu material. I'm not trying to be comprehensive here, just some articles of interest to me:

Locally, Maryland has roughly 10,000 confirmed cases and 350 deaths. Calvert county has 102 cases, up three from yesterday, and still only 1 death. No cases have been reported in our zip code.

Yahoo! Inan Dogan, PhDWe Are 100 Times Safer Now Than In Early March: Here is the Math. Basically, it comes down to the facts that symptoms are delayed over infection, hospitalizations are delayed from infection, and deaths are delayed from hospitalizations. The fact that we see infections, hospitalizations and finally (maybe) deaths declining means social distancing is working and we're on the down hill side of the curve. But down quit yet. The virus is still around, and most of us are still not immune but, from Hot Air, Hmmm: 15% Of Pregnant Women Recently Admitted To NYC Hospital To Give Birth Had Coronavirus — Nearly All Without Symptoms. Still, it takes more like 70% for some level of "herd immunity", and Hmmm: 36% At Boston Homeless Shelter Tested Positive For COVID-19, Vast Majority Without Symptoms. A very strange disease. Many people have very little or no symptoms, and some get very sick and die.


The greater New York City area stands alone on a map of the US with coronavirus cases and deaths. 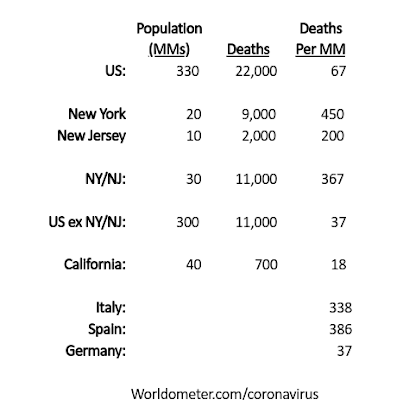 Well, the people in New York wanted to be more like Europe.


With apologies to the good people of the great (but suffering) states of Illinois, Michigan and Louisiana, the US is basically two countries. New York (by which we mean, the Greatest City in the World and the surrounding counties) and New Jersey are having a death toll comparable to the most afflicted countries in Europe. 90% of the country, however, is running as well as Germany, which is widely regarded as a "How did they do it" success story.

And California?!? They had early inflows from China and the same President, FDA, and CDC as the rest of the US. Testing? Limited. Yet there they are, half the German per capita toll. Hard to credit Trump for that. Or blame him.

Why the difference? NYC is a major hub for international travel, its mass transit usage dwarfs other cities, its population density is 50% higher than San Francisco at number two, and who knows what else. [Another guess: California and Washington were hit from Wuhan and may have gotten some help from the Jan 31 China travel ban; NYC got more infections from Europe than Asia.]

Politically, one size clearly does not fit all across the US. Trump is a New Yorker. Its likely he and the media are very New York-centric (I know I am.) But we will be re-opening the economy by regions, not all at once.

Sundance at CTH is paranoid, but is he paranoid enough?  It Begins – East and West Coast Blue States Team Up To Begin Economic Civil War…


“No state shall, without the consent of Congress, … enter into any agreement or compact with another state”..

The three step plan seems predictable: (1) Get out ahead of President Trump. (2) Defy the ‘all clear’ and shape economic benefit to their political allies. (3) Then use Fauci’s upcoming dossier to hit the administration for heartlessly opening the economy too early.

♦ On the East Coast the governors of New York (Cuomo), New Jersey (Murphy), Connecticut (Lamont), Pennsylvania (Wolfe), Delaware (Carney) and Rhode Island (Raimondo) have started assembling their economic war council with the intent to keep the northeast region shut down. Controlling critical ports and infrastructure is a key part of their strategy.

EAST COAST — Six Northeast governors will form a working group to come up with a plan to restart [control] the regional economy, they announced on Monday. (link)

Politicians using a deadly illness for political purposes? I may need to borrow Sarah Hoyt's shocked face. Mine has worn out.

Linked at The Daley Gator in Thursday LinkApaloozaManiaFest!.
Posted by Fritz at 12:03 PM