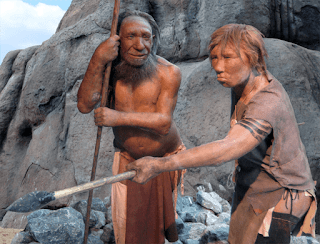 Neanderthals were eating fish, mussels and seals at a site in present-day Portugal, according to a new study.

The research adds to mounting evidence that our evolutionary relatives may have relied on the sea for food just as much as ancient modern humans.

For decades, the ability to gather food from the sea and from rivers was seen as something unique to our own species.

Scientists found evidence for an intensive reliance on seafood at a Neanderthal site in southern Portugal.

Neanderthals living between 106,000 and 86,000 years ago at the cave of Figueira Brava near Setubal were eating mussels, crab, fish - including sharks, eels and sea bream - seabirds, dolphins and seals.

The research team, led by Dr João Zilhão from the University of Barcelona, Spain, found that marine food made up about 50% of the diet of the Figueira Brava Neanderthals. The other half came from terrestrial animals, such as deer, goats, horses, aurochs (ancient wild cattle) and tortoises.

It's long been dogma that Neandertal specialized in hunting large animals with their stabbing spears. This work shows that Neandertal was far more versatile than we had imagined. I would like to know how they wrangled dolphins!

Most of our archeological evidence has been wiped out, or at least drowned due to the 300 feet of sea level rise in the last 40,000 years.  Most of the evidence of Neandertal living by the sea has been eliminated but some may remain from the Eemian Interglacial.
Posted by Fritz at 8:10 PM