Time For Plan B

In today's Post, the President is now on record as requiring all federal projects to check off the box "Did this project consider the possible effects of sea level rise?"

In major shift, Obama administration will plan for rising seas in all federal projects

The order represents a major shift for the federal government: while the Federal Emergency Management Administration published a memo three years ago saying it would take global warming into account when preparing for more severe storms, most agencies continue to rely on historic data rather than future projections for building projects.

Washington D.C. was all well and good as a temporary capitol for the young nation stretched along the Atlantic seaboard. Built largely on low lying land between two tidal rivers, much of it wetlands where such building would not be permitted today, the founders could not know that it was doomed in the future by the rising seas from the melting glaciers at the end of the last glacial period. 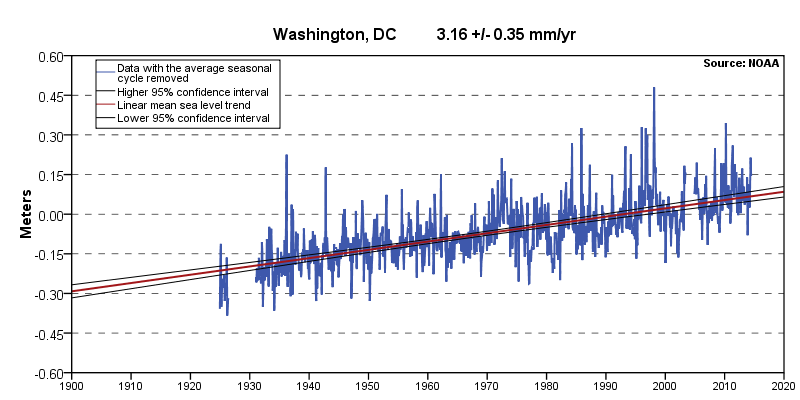 Oh my gosh, 3.16 mm per year, or even as much as 3.51 if you throw in the upper confidence level for good measure. At that rate, I calculate that the rising seas will cover the tippy top of the Washington Monument (555 ft, to which I have generously added 20 ft for the huge hill the monument sits on) in only 49,931.62 years. (It very important to use a lot of significant digits if you wish to convince someone that your calculations mean something) We must take this threat seriously, and start considering a new location for the capitol, one far from the rising ocean, and much further north, to avoid the prospect that the weather could become as bad as say, South Carolina's or Georgia's.

Many years ago my father made a suggestion to fix the capitol's East Coast bias by moving it somewhere closer to the geographic center of the country, to Fargo, North Dakota.  The actual geographic center of the United States is located near Belle Fourche, South Dakota, close enough.  But it would also serve to stave off the effects of rising seas, because at an official elevation of 904 ft it will not be inundated by the rising seas for almost 79,000 years.

Moreover, it's climate is, to say the least, in need of some warming:

At least the summer thunderstorms will remind the transfers from D.C. of their native clime. They will, however,  have to learn to deal with cold and snow, or the city will be shut down a lot more than it is at present. Not that it's necessarily a bad thing.

With due apologies to Fargo, it think it's not too soon to being preparing for the move. It's too bad we didn't take advantage of the 2011 Virginia earthquake's loosening of the stones of the Washington Monument as well as other local landmarks as an opportunity to start the process of dismantling them, packing them onto freight trains and sending them to the north country.

Linked at Pirate's Cove in the weekly "Sorta Blogless Sunday Patriotic Pinup." Thanks Teach!
Posted by Fritz at 10:53 AM