From Cape Cod to the Chesapeake Bay, charter boat fishing captains are angry about a mandate to reduce the number of striped bass that can be caught by recreational fishermen.

Saltwater fishing guides in Maine, however, are swimming against the tide. They think it’s about time for tougher regulations – and some say it may be too late to help the struggling species rebound.

“We are thrilled there is a reduction coming. There isn’t a guide here who’s not thrilled,” said Capt. Mike Faulkingham, president of the Maine Association of Charterboat Captains. “In Maine, a whole group of people absolutely are concerned about the fish and absolutely want to do what’s right for it. People really are adamant.”

A big difference between the Chesapeake Bay and Maine is that the Chesapeake still supports a substantial commercial fishery in Striped Bass.  These fishermen get paid by the pound, and not by the trip, and the cut in their take is a direct cut in their income. The fishing guides I know realize that the fishing is declining and if they don't get the population stable, they won't have business in years to come, but they can continue to make about the same money with lower recreational limits.


The Atlantic States Marine Fisheries Commission, which manages the migratory fishery in state waters along the East Coast, is requiring states to reduce the 2015 recreational harvest of striped bass by at least 25 percent from 2013 levels. The catch has dropped precipitously in Maine since 2006 and is declining elsewhere along the Northeast seaboard. 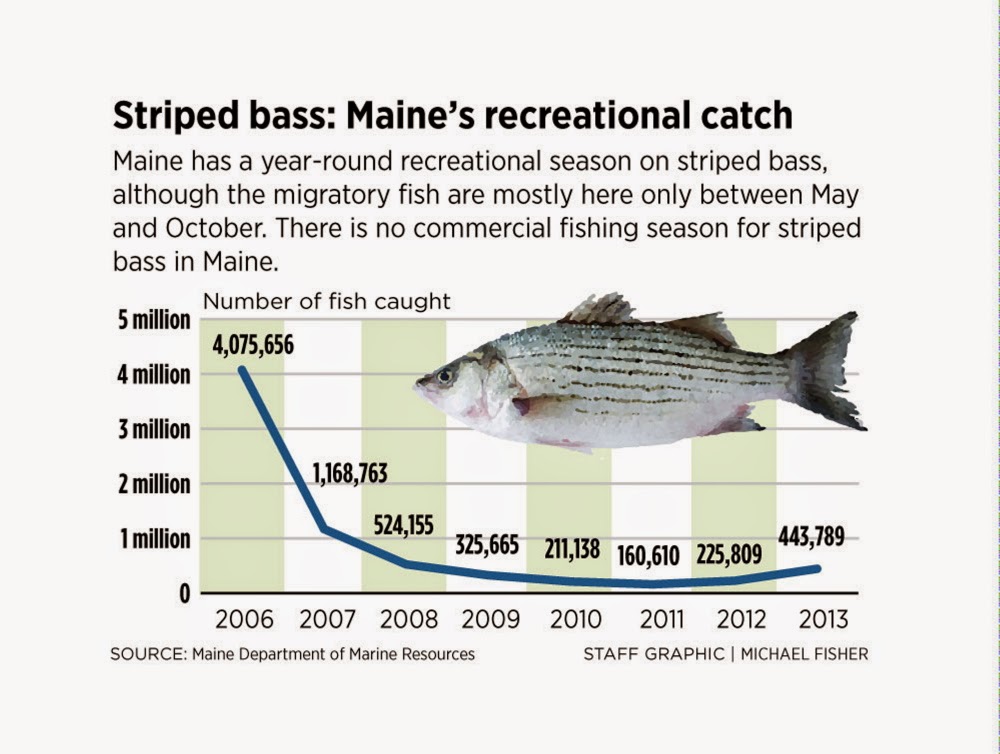 That is quite a remarkable drop; far more than the Chesapeake Bay catch has declined.


Biologists are at a loss to explain exactly why the striper population has declined. Possible causes range from overfishing to an infectious disease affecting the species in its chief breeding grounds, the Chesapeake Bay.

My guess is that with fewer stripers competing for resources, they don't have to travel as far up and down the coast to find enough food. If you want to find Stripped Bass, find out where they are feeding.