The Protruding Nail Attracts the Hammer. . . 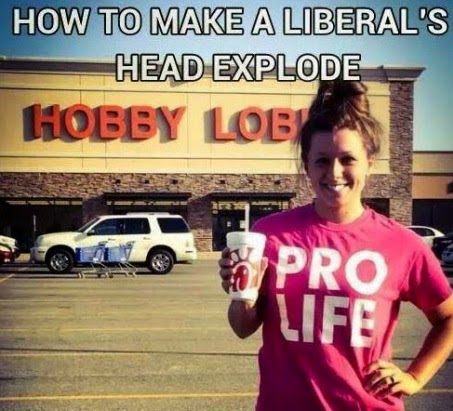 
Readers may recall @HollyRFisher as the mom whose Facebook image holding a Chick-fil-A iced tea in front of Hobby Lobby made liberals’ heads explode in July 2014. Her stand for religious freedom made her the target of rape threats from “tolerant” liberals, and conservatives responded with the #IStandWithHolly campaign.

She was soon appearing on national TV as a conservative heroine. Suddenly being thrown into the spotlight was apparently a disorienting experience that nearly destroyed her family. Her personal problems were entirely private, however, until somebody decided that gossip should benews. For reasons known only to himself, Chuck Johnson of GotNews.com applied his skills as an investigative reporter to expose Mrs. Fisher’s affair with a videographer named Joel Frewa.

Really, Chuck? Was this necessary? Did this serve any legitimate journalistic purpose? At a certain level, I can understand the logic here. Democrats are the party of lies and perversion and, as antagonists of such evil, conservative journalists are quite eager to report the typical Democrat behavior of Bill Clinton, Eliot Spitzer, Anthony Weiner, Terry Bean, Joe Morrissey, et al. So when we become aware of Republicans behaving like Democrats, conservative journalists are thrown onto the horns of a dilemma, faced with two choices:

Do we report the story?

Do we ignore it, cross our fingers and hope that the misbehavior of these Republicans doesn’t turn into a damaging scandal?

The answer is almost always Number Two, and we sometimes feel like awful hypocrites for staying silent. More than once, I’ve become aware of shady behavior by people on “our side” and kept it to myself, only to see the scandalous truth subsequently blazoned in headlines at Politico or some other liberal outlet. Well, OK, this is how the partisan game is played: Liberals expose Republican scandals and conservatives expose Democrat scandals, and it is not my job to help liberals do their work.

Is that cynical? Sure, but a certain amount of cynicism is necessary to be able to maintain your sanity in this crazy business. . .

And now, the other side. Remember those protesters who shut down the I93 in Boston and blocked the ambulance from reaching the hospital.  Reporters from WBZ Boston used their arrest records to track them down to their (parents) houses and try to confront them. They were mostly living in their parents basement, and were not happy to face the press:

As for Holly, she seems to have reconciled with her husband.
Posted by Fritz at 10:08 AM