Virgin Birth? What's So Hard About That? 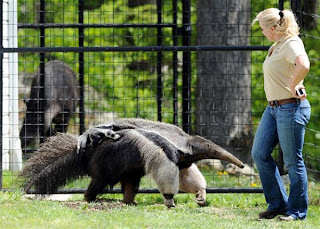 The story unfolded at the LEO Zoological Conservation Center in Greenwich, Conn.: Last month, Armani gave birth to a cute baby pup named Archie. The only problem was, Archie wasn't supposed to exist.

Armani already had given birth last August to a female pup named Alice, fathered by a male anteater at the center named Alf. Anteater dads have been known to kill off their progeny, so Alf was put in a separate pen for several months. Marcella Leone, the nonprofit center's founder and director, said Armani and Alf shouldn't have had the opportunity to conceive little Archie. 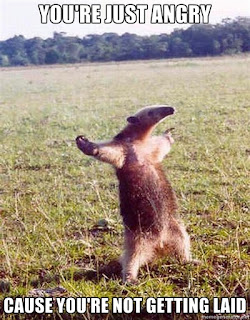 Well, it wouldn't strictly have been "virgin" birth if she had already had sex at least once and given birth to a previous pup (why pup and not, say. calf, cub, foal or kitten?), but it would still be kind of special (and by special, I mean unfortunate) if lady mammals got into the habit of doing without men.


Leone speculated that the "virgin birth" may have been a bizarre case of delayed implantation, also known as embryonic diapause. Some species are able to hold up hormonally on having their fertilized eggs attach to the uterine wall and start developing, apparently as a stress response. That's known to happen to armadillos, which are in the same scientific superorder (Xenarthra) as anteaters. "It's been presumed that giant anteaters can do this as well," Leone said.

Whew! At least men would still be needed, and once they were done, they could go off on extended hunting and fishing adventures and come back to an increased family.  Although, come to think of it; that's kind of like what happens to sailors now.


However, it may not be necessary to turn to diapause, or to a different kind of "virgin birth" known as parthenogenesis, for an explanation. Despite the best efforts of the conservation center's staff, it's conceivable that Armani and Alf found a way to couple through the enclosure's high-tensile fence. They may have even indulged in a brief encounter while they were being moved around.

"I have seen anteaters breed many times, but that doesn’t mean I know exactly what is going on in amongst all that hair," Marie Magnuson, a biologist at Washington's Smithsonian National Zoo, told NBC News in an email. "There is some thought that there is no actual penetration, just a lot of rubbing up together. If that is the case, then his sperm are doing all the heavy lifting on the job, and a fence would not be an insurmountable barrier — as long as it is chain-link and not solid."

Could it be we've ventured into the TMI zone regarding anteater sex?  You might not want to touch the fence at the anteater exhibit...

Anteater meme generator here. No I didn't invent my own, with 863 pages to choose one, it seemed easier to let someone else do the creative work.
Posted by Fritz at 5:11 PM