In what they say is the first analysis of its kind, scientists with the U.S. Geological Survey and a couple of universities report that declines in environmentally sensitive amphibians are more widespread and more severe than previously thought. Even the most common critters, such as the spring peepers that make Maryland marshes ring with their mating cries, appear to be losing ground.

What's more, they also seem to be vanishing from ponds, streams, wetlands and other supposedly protected habitat in national parks and wildlife refuges... 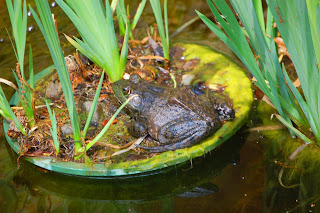 So it's hard to invoke the usual bugaboo of habitat destruction in those cases, although I'm sure there are many places where that is true.


"We don't know how long it's been going on or whether it's a trend that will continue," said Michael Adams, the study's lead author and USGS research ecologist in Oregon.

The study did not attempt to identify the cause or causes for the declines. Amphibian losses have been linked previously with development, disease, chemical contaminants, climate change and even introduced species. While a fungal disease blamed for frog die-offs in other countries is found in the United States, Adams said, "we're not seeing patterns that would help us make that link."

The researchers limited their monitoring to sites controlled by the U.S. Department of the Interior, so development likely had little direct impact on the amphibians' habitat.

"The fact we see declines even in protected areas means there is some larger-scale issue going on with amphibian populations," Grant said.

It certainly been obvious in my lifetime.  Even as recently as ten years ago, our small pond would attract up to 5 frogs at a time.  In the last few years, we're lucky to have one or two.