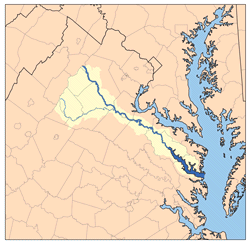 John Odenkirk, a fisheries biologist with the Virginia Department of Game and Inland Fisheries’ Fredericksburg office, will talk about the invasion as part of the Friends of the Rappahannock’s annual meeting May 20. He’s been studying snakeheads since they were first found in the Potomac River in 2004.

Since then, they’ve been migrating downstream. By last summer, the invasive fish had reached the mouth of the river.

Odenkirk said in an interview with The Free Lance–Star last June that it was only a matter of time before the fish made it to the Rappahannock.

That happened the following month, when an angler caught one in Ruffins Pond along Routes 2 and 17. The waterway feeds into Massaponax Creek, a tributary of the Rappahannock.

Shortly after that, a game department sampling crew caught another one and saw a few others, Odenkirk recalled in an interview last week.

“Within a week, an angler caught one in Massaponax Creek,” where it enters the river. “At that point, it was, ‘Wow. The cat’s out of the bag,’” he said.

The Rappahannock is, as you can see from the map, the next major river on the western side of the Chesapeake south the the Potomac.  The presence of the Northern Snakeheads in the Potomac, especially in the upper, fresher end like Dogue Creek and Mattawoman Creeks has been well established for a couple of years now.  It was hoped that the saltier waters near it's mouth would inhibit their spread down the Bay.  However, it seems that they tolerate salt well enough to make it past the barrier.  There's not much left to do but take advantage of them.  I hear they're delicious. 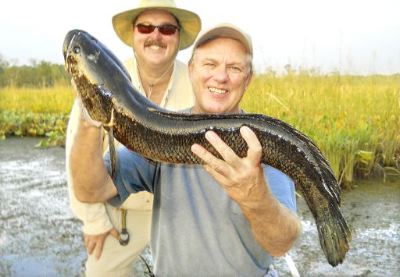