According to Professor Jacobson: “The documents being withheld will help shed light on the details of this highly publicized non-prosecution, which raised issues as to whether well-connected and famous D.C. insiders were treated as any other citizen in a similar situation. I appreciate Judicial Watch assisting in this search for the truth.”

“Judicial Watch is pleased to be representing Legal Insurrection and Professor Jacobson in this important matter of equal justice under the law,” said Judicial Watch President Tom Fitton. “The way Gregory’s prosecution decision was handled undermines confidence in the fair administration of justice. If Gregory shouldn’t be prosecuted then no one should be – and the law should be rescinded. In the meantime, we hope the courts end the cover-up of the circumstances of the Gregory investigation.” 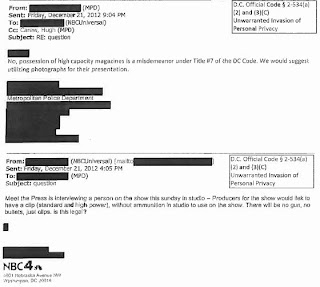 As they say, read the rest of the story to see how forthcoming the DC government has been regarding their decision to let David Gregory and NBC off of this rather serious (at least when other people do it) infraction.

As they say some pigs are more equal than others.

It's good to see Professor Jacobson, Cornell Law Professor and blogger, getting into the fray.
Posted by Fritz at 5:00 AM