Can Beer Drinking Save the Bay? 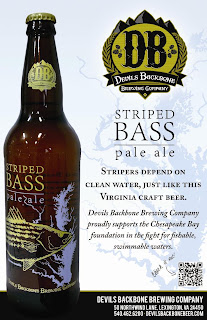 You can actually help save the Chesapeake Bay the next time you enjoy a tall, cold one.

Devils Backbone Brewing Company is contributing some of its proceeds to do just that. A limited-edition beer called Striped Bass Pale Ale is flying off of the shelves. Sales generated a $30,000 donation to the Chesapeake Bay Foundation.

Devils Backbone founder Stephen Crandall was fishing on the Chesapeake when he came up with the idea of a beer to save the bay.

"Striped Bass was inspired by striped bass fishing in the Chesapeake Bay the idea is that striped bass has to have clean water in order to live," Richardson said.

I don't know about that; I've caught stripers out of some pretty disgusting looking water, full of suspended sediment, colored with red, green or brown phytoplankton, and sometimes with a bare minimum amount of dissolved oxygen.  As long as they can find food (and enough oxygen to get by) they seem to do pretty well.  They have to be adaptable to live in an estuary like Chesapeake Bay.

The beer has a light copper color and is described as crisp and refreshing.

So far the company and five of its distributors donated $30,000 this year alone to the Chesapeake Bay Foundation. They've given $50,000 during the past two years.

$50k ain't gonna save the Bay, but on the other hand, I'm not opposed to drinking a beer for the Bay either.  However, if I had $50k to contribute to the health of the Bay, I'm not sure donating it to the Bay Foundation would be the most effective use of that money.  It would probably be better spent to send some family elsewhere to live.
Posted by Fritz at 6:22 PM