For the second day in a row, a strong storm system with several tornado producing supercells stretched from Texas to Illinois.  The town of Moore, Oklahoma has been hit particularly hard today.  A tornado estimated to be be up to a mile wide on the ground tore through the town with 16 minutes warning (which is a good thing).  The pictures being shown on TV now are truly appalling, a giant swath of the city simply destroyed. Two elementary schools were destroyed. In at least one, Briarwood, all students have been accounted for.  However, current reports have 8 dead in Moore. 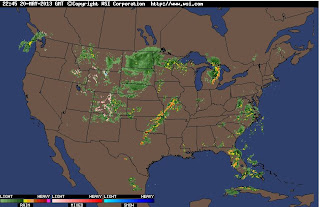 AM UPDATE: As of late last night and early this morning, the death toll is up to 51 and climbing, many of the victims having been children at Plaza Towers Elementary School.  Drudge is reporting 91 dead.


This tornado is in Oklahoma so clearly it has been ordered to only target conservatives.

When the death toll started to climb (and negative feedback reached her, no doubt), she thought better of the tweet.


Made a political joke, Twas before devastation revealed. In hindsight, had I understood, I would have refrained. Beyond sorry.

PM UPDATE: Death toll reduced to 24; apparently there was some double counting going on.  Still pretty awful, though.
Posted by Fritz at 7:27 PM