FEMEN Goes After the BIG Issues

After having dealt with Vladimir Putin, two different Popes, the problem of the anti-female aspects of Islam, the yahoos at Davos, and my hero Silvio Berlusconi,  FEMEN has decided to set the power of the female boob (take that anyway you want) against the real enemy, Barbie (yep, the doll). 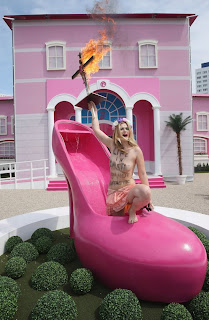 Barbie, the world's most famous blonde, has a new home in the German capital. Offering an “interactive experience” for visitors, the life-size pink mansion is hard to miss stretching over 2,500 square metres nestled between eastern Berlin's communist-era tower blocks.

For €22, visitors can peruse Barbie's walk-in wardrobes, learn how to be a model, do their make up and have their photos taken. Almost the entire place is pink – a colour that has sparked a heated debate about gender stereotyping among critics.

So bringing boobs to bear on the problems of dolls with excessively big boobs?  I guess I don't quite understand, not that I don't appreciate the gesture. 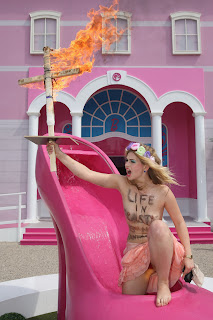 Among some of the few guests on Thursday afternoon was a trio of six-year-old girls. Sitting on pink garden chairs outside, covered in glitter from the “make-up” room, they were clearly very excited about being able to go in Barbie's house.

“They saw the posters around the city and wanted to come,” said Anja, mother to one of the girls. “It was too expensive but if the kids like it, that's OK.”

After they left, members of the controversial topless feminist protest group Femen arrived wielding a burning cross with a Barbie doll strapped to it. "Life in plastic is not fantastic," adorned the woman's naked torso.

Tell that to Grace Slick, the original plastic fantastic lover.

Though its opening had been keenly awaited by some of the city's younger residents, the house has garnered massive criticism from German feminists, anti-capitalists, and even average members of the public – some of whom were present in Barbie outfits.

Over 100 more were expected to attend a protest later in the day organised by a youth socialist group Linksjugend, which is also behind the “Occupy Barbie Dreamhouse” campaign gaining attention online.

“We are here because sexism is being used for capitalist gains,” 25-year-old Linksjugend member going by the name Steini said. Standing across the street, they were told to leave Barbie's grounds. “We aren't actually going to occupy the house, but we plan on demonstrating peacefully,” he said.

The group was not, he explained, against children having fun, but was opposed to them allegedly being manipulated for financial gain. Behind him, a young girl came out with her grandparents toting a bag with two new dolls in it.

Not one of your better efforts, girls.  There's only one of y'alls, and while she's attractive enough, we could use a little more variety; some redheads and brunettes.  It's also a bit of a let down after hitting such targets as Putin, the Pope, Islam, Berlusconi, and Davos.