Of course, the assault rifle in question was only two inches long and made of plastic... 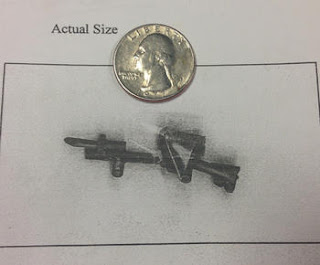 ...The toy that caused the uproar on the school bus Friday looks like a tiny assault rifle. It’s from a G.I. Joe action figure. It’s less than 2 inches long, and the boy is 6.

“I think they overreacted totally. I totally do,” the boy’s mom, Mieke Crane, told WGGB-TV. Her boy had to write a letter of apology to the bus driver, though after she met with school officials yesterday, they agreed to drop the detention he had been sentenced to serve. Mom didn’t want to talk about it anymore. She handed off to an expert — her own mom, the boy’s grandmother. Sara Godek is a retired school principal from Connecticut, and had this to say:

“I would’ve said, ‘Put it away’ or ‘take it home’ or ‘I’ll hold onto it until the end of the day. You’re not allowed to bring toy guns to school or on the school bus. I know. But the poor little guy is already so upset about this. I really think they overreacted. The problem is, we don’t use our heads.”

This isn't about school safety; nobody, not even the school administrators, who were pretty stupid,  were under the illusion that the gun in question could cause any physical harm to any of their changes.  No, this is about education propaganda, a deliberate attempt to demonize guns of any sort for any purpose in the minds of all their students forever.

The administrators need to horsewhipped.  But failing that, they should be sued, over and over.
Posted by Fritz at 5:00 AM