While Washington D.C. (and Slower Maryland) are not prime tornado country, we do have a few of them wander through.  The Washington Post, feeling jealous of the the attention that Moore, Oklahoma is getting, highlighted Washington D.C.'s history of tornadic activity in today's paper.

Fortunately, the Washington, D.C. area does not experience tornadoes that are as frequent and intense as the Plains and Southeast. However, weaker tornadoes are not uncommon.

The 8 tornadoes recorded in D.C.

This map below, created by CWG’s Kathryn Prociv, does a nice job of illustrating the region’s tornado history, showing the paths and intensity of the various twisters between 1950 and 2011, totaling around 460 (or 115 for the District and the surrounding counties listed in the Climate Central map below). 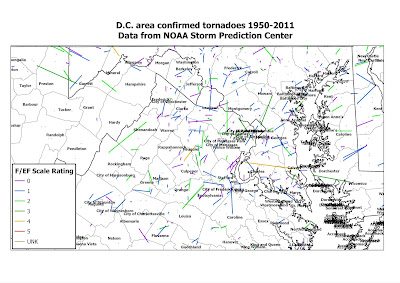 Kind of a cool map. Click on it to expand it, and then look for the long orange streak crossing from the Potomac River to Chesapeake Bay. That was the  tornado that devastated La Plata, Maryland on April 28, 2002.  It passed within 1 mile of our house as it crossed the Bay to the Eastern Shore (the long green streak on the other side).  I remember it pretty well.  We didn't know about it as passed (although we knew we were under a watch) but found out shortly after.  It was pretty spent by that point, but there was still a distinct path of downed trees and branches and damage to houses.

But for a sense for the real threats across the US, try this one: 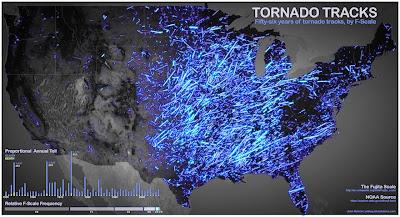