Now, we're talking derivatives here, not absolute rates.  Sea level is still rising, but according to satellite measurements, the rate at which it has been rising is declining.  From Watts Up With That:

Obama was right–‘the rise of the oceans began to slow’

From his June 4, 2008 speech on winning the Democratic primaries: 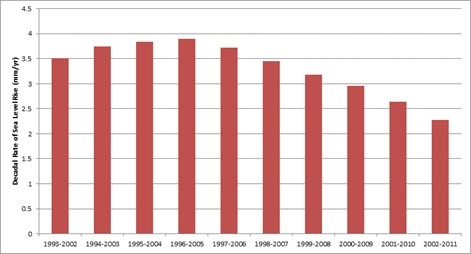 Even local tide gauges show similar long term effects, which can only be observed in long-term averages.  From NOAA for Baltimore: 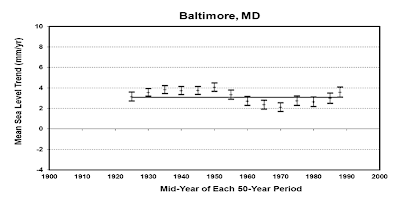 Of course, if you actually bother to look at the x-axis on the top graph,  you'll see that the rate of sea level rise started to decline in about 2000 (the highest point is centered on 1996-2005), so if one were to blame a politician at all, you would have to blame George W. Bush.  But he's too modest to take credit.