From the Chesapeake Bay Program blog:

...“We are watching about 27 million juvenile oysters being planted into Harris Creek,” Westby said, as a hose blasted the oysters off the deck into the waterway, which is a tributary to the Choptank River and Chesapeake Bay.

The $31 million Harris Creek project is one of the largest and best-protected oyster restoration efforts ever attempted on the East Coast. NOAA is working with the Maryland Department of Natural Resources, the U.S Army Corps of Engineers, and the Oyster Recovery Partnership, to plant about 400 million oysters inside a protected sanctuary.

In this no-harvesting zone, sonar helps the scientists aim the baby oysters on top of reefs re-built with granite and recycled shells. 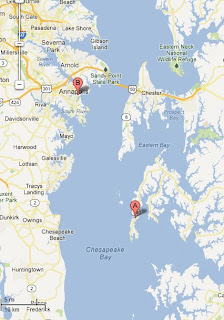 I agree that oyster restoration areas should be no harvest zones.  However, we've seen "oyster sanctuaries" in Chesapeake Bay suddenly be opened to commercial fishing once the oysters became of marketable size, with the excuse being that they would just die of disease anyway.  Sanctuaries are also routinely plundered by poachers, as little is done to protect them other than to declare them off limits.

The 4,500 acre Harris Creek oyster sanctuary was created in 2009 by Governor Martin O’Malley’s administration. His Department of Natural Resources that year more than doubled the amount of no-harvesting zones in the state’s portion of the Chesapeake Bay, which now protect 24 percent of the Bay’s remaining reefs.

The new approach, being tested here in Harris Creek, is to focus on the oysters, not the oystermen. However, watermen will likely benefit more in the long run. Studies have suggested that protected reefs generate multitudes of oyster larvae, fish and crabs that spread out to populate a much wider area. 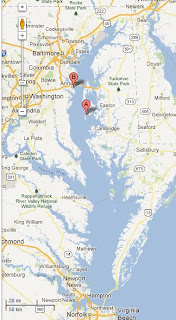 4,500 acres seems like a lot of water to put into oyster restoration; and it is compared to previous efforts. But I put the maps up to remind us of how trivial that really is in the scope of the entire Chesapeake Bay, which is just about 4,500 square miles.  There are  640 acres in a square mile.

I still maintain that the best oyster restoration would a 5 or more year moratorium on oyster harvesting in the Bay, to find out whether oysters still have to potential to grow and spread without hindrance in the absence of fishing pressure.
Posted by Fritz at 7:14 PM