The River Of Ancient Mars 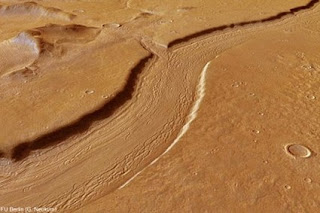 For this mornings 6 o'clock Eye Opener, we have an article about what appears to be an ancient, dried river bed on the planet Mars, brought to you in real and false color by the European Space Agency.


The European Space Agency announced Thursday that it has taken high-definition pictures of an ancient river nearly 1,000 miles long on Mars.

According to the report, the "striking" river also has "numerous tributaries" and is believed to be more than 4 miles wide and nearly 1,000 feet deep at some points. The agency believes that the river was carved by water between 1.8 and 3.5 billion years ago and went dry due to evaporation. 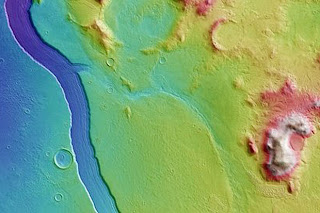 The agency has named the river Reull Vallis. The photos were taken with the ESA's Mars Express satellite last year.

"The region shows a striking resemblance to the morphology found in regions on Earth affected by glaciation," the ESA said in a statement. The discovery is "giving planetary geologists tantalizing glimpses of a past on the Red Planet not too dissimilar to events on our own world."

In September, NASA announced that its Curiosity Rover had discovered evidence of an "ancient stream" that "once ran vigorously" near the Gale Crater that the rover is exploring. According to that report, the stream may have been several feet deep.

No word on any fish fossils yet.  However, the presence of sufficient water to create this large river, and long lasting enough to carve 1000 ft deep  seems to make the possibility of some kind of life possible at one point.  Salmon?  Probably not.


Of course the great American SciFi writer, Edgar Rice Burroughs anticipated the findings of rivers on Mars with his series of Mars books featuring John Carter (which can be obtained rather cheaply on Kindle through Amazon), postulating a Mars drying but still alive, with a rivers, weird and abundant wildlife, some earth like and some not so much, and a number of "sort of human" societies, with striking color differences (green men, red men and black men), and, of course, the omnipresent good looking women of color.