WAPO: The NRA is Winning

I'm sure that inside the Beltway, and in other areas within the liberal echo chamber, the great washed masses think that they're going to win this battle, even if they have to crawl up a ramp of bodies from the Newton massacre victims to storm the gates and break through the NRA wall.  However, in this article in today's Washington Post, Chris Cillizza and Aaron Blake suggest that victory is not yet in hand:

It’s easy to think that in the wake of Wayne LaPierre’s angry press conference and the National Rifle Association’s tin-eared web video on President Obama’s daughters that the NRA is losing — and losing badly — in the fight over the proper place for guns in American society.

There’s little doubt that the inside-the-Beltway crowd and those who have been longtime advocates of more gun control laws are outraged by the brash style that the NRA has adopted following the shootings in Newtown, Conn.

But, there’s also plenty of evidence to suggest that the NRA is regarded entirely differently in the country at large. Polling conducted by NBC News and the Wall Street Journal this week showed 41 percent of people had a favorable opinion of the NRA, while 34 percent viewed it unfavorably, a margin largely unchanged from a similar survey conducted in January 2011.

And a look at the longer-term trend line on views of the NRA by Gallup suggests a striking consistency in the overall impression Americans have of the gun rights group. 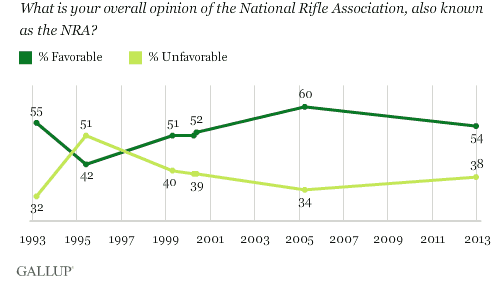 I think that's essentially correct, and it will prove an impossible task to get more than a nominal change in the gun laws on a national level (I expect something along the lines of closing the alleged "gun show loophole", by mandating all sales of handguns between private citizens be processes through background checks by FFL holders (Walmart) for a price, or outlawing new 30 round magazines.  The law will be unenforceable, and widely ignored.  The article goes on to say as much:


The likelihood is that whatever passes through Congress will be small, not big. While the NRA is fighting on all fronts at the moment — including opposing the executive orders signed by Obama — the organization almost certainly recognizes that some sort of measure(s) restricting gun rights is likely to be made law.

Given that, the NRA’s goal — unstated, of course — is likely to keep what Congress passes on the small side in terms of impact. So a ban on high capacity ammunition clips magazines might be acceptable, but a new version of the assault weapons ban wouldn’t be.

But don't get cocky; unlike an opera, this isn't over when the fat lady sings.  They'll keep coming back for incremental restrictions.


A day off for fall break was anything but relaxing for a 12-year old Bryan County girl, when an intruder broke into her home on Michael Avenue.

Deputies say, the girl was home alone when a man she'd never seen before, rang the front doorbell. They say when no one answered the door, the man went around to the back of the house and kicked a door open. That's when authorities say, the girl grabbed a gun and hid in a bathroom closet.

"He had worked his way all the way through the house and into the bathroom. And from what we understand, he was turning the doorknob when she fired through the door." Says Bryan County Under sheriff, Ken Golden.

After the man was shot, The 12- year old ran out of the closet and called for help.

To argue like a liberal, you would have to say that gun control advocates would prefer her to have died than to save herself with a gun.
Posted by Fritz at 5:55 PM