An alternative title to the article by Chesapeake Bay Foundation Bloggers: 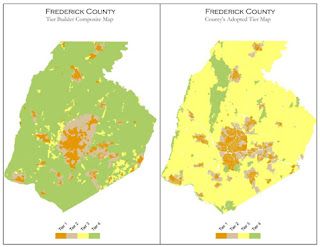 
This starkly contrasting pair of maps reveals something troubling about Maryland’s efforts to reduce pollution into the Chesapeake Bay by limiting suburban sprawl.

The large green areas on the map at left are the farms and forests of Frederick County that should be protected from large development projects under a 2012 law called the Sustainable Growth and Agricultural Preservation Act, according to the Maryland Department of Planning.

The law encourages growth in existing towns and areas to be served by sewer, and is designed to prevent construction of major housing projects in rural areas using outdated septic tank technology, which creates about 10 times more nitrogen water pollution for Chesapeake Bay tributaries. In the map at right, however, most of Frederick County’s green areas have been stained lemon yellow (meaning open to large developments) on the Frederick County’s version of the planning map – meaning that the county doesn’t want to follow Maryland’s new guidelines for protecting farms and forests.

Maryland Planning Secretary Richard Hall recently presented these maps to a state senate committee to illustrate how two of the state’s fastest growing areas -- Frederick and Cecil counties -- have deliberately refused to follow the Sustainable Growth and Agricultural Preservation of 2012 (which is sometimes called the “septic bill.”)

“In those two counties, especially, they’ve essentially ignored the law, therefore allowing major subdivisions on septic systems almost across the whole rural part of the county,” Hall said. “This, in effect, neutralizes any impact from the legislation.”

Several of the state’s other rural counties appear to be watching Frederick and Cecil counties, to see if they can get away with ignoring the new law. And Governor Martin O’Malley’s Administration is studying what, if anything, the state can do about it.

Maryland is a state dominated by urban politics, most specifically Baltimore and the urban areas surrounding and largely dependent on Washington D.C. Our governors are often the ex-mayors of Baltimore, and in elections, the urban areas support for democrats and liberals often edges out the suburban and rural support for republicans and conservatives in statewide elections.

This is a case where the urban governor has promulgated, and the largely urban legislature has passed laws that impact heavily on the more rural section of the state, and frankly, they resent it.
Posted by Fritz at 7:10 PM