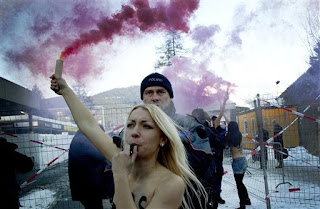 The attention whores mongers at Femen have decided to bite the hand that feeds them, and protest the Davos World Economic Forum, where the elites from government, media and entertainment industry gather to celebrate, well, how special they all are:

Police in the Swiss resort of Davos quickly arrested the three topless women demonstrators near the heavily guarded grounds of the World Economic Forum (WEF) as they repeatedly chanted, "Poor because of you!".

"In this building now there are a lot of men but only a few women, the same way as in each parliament and in each congress," protester Inna Shevchenko told reporters on her way to the venue where business and world leaders gathered for the 42nd annual WEF meeting.


I have to say, girls, I ordinarily support anything you oppose, on the grounds of keeping the protests alive, but I have yet to see anything useful come out of a Davos meeting, and much that's concerning and annoying. Maybe you're getting better at picking causes.

There's a better video of the protest here, which I can't figure out how to embed.Oh wait; Youtube comes through again!

It's Tuesday and Wombat-Socho has his grand weekly Rule 5  post up at "The Other McCain."
Posted by Fritz at 6:00 AM