Sediments behind the Conowingo dam threatening Chesapeake Bay restoration efforts must be dealt with sooner rather than later, and Exelon should be part of the solution as part of the relicensing of its hydro-electric power plant, a Maryland natural resources official said Tuesday.

Bruce Michael, director of the Resource Assessment Service at the Department of Natural Resources, made the comments as the Chesapeake Bay Program released a study using a new statistical method to gauge Bay pollution levels that found sediment pollution from the dam has been increasing.

The dam across the Susquehanna River, the Bay's major freshwater source, has kept sediments and other pollutants from reaching the Bay for decades, but scientists warn it is reaching capacity. That means that storms more frequently are pushing muddy water over the dam, threatening ecologically important Bay grasses, oysters and other species. 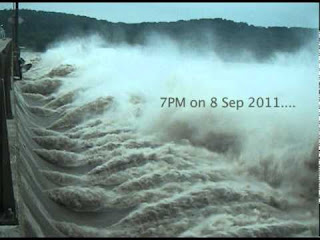 As I've noted before, as long as I have lived in Maryland, the EPA Bay Program, MD DNR, MDE, and a variety of scientist have been saying that the pond behind Conowingo was filling with sediment and would soon not be able to keep it out of the Bay, as it has since construction was completed in 1928.  IIRC, they were saying the dam had 20 years left about 27 years ago.  Apparently that time is now.

So, I guess the question now is what should be done.  Dredge the sediment out and pile it somewhere?  A tremendous project, hugely expensive, and environmentally damaging itself.  The sediment is full of nutrients and a pretty fair load of toxic organics and metals, so it would likely have to be stored in a sealed bed, rather than being used to re-enrich the farmlands the sediment washed away from.

And that brings us to another issue.  Who should pay.  The politicians, of course, want the power company that owns Conowingo now, Exelon, to pay.


"Maryland wants to ensure that Exelon is part of the sediment management solution through the relicensing process," he [Michael] said.

A request for comment from Exelon was not immediately returned Tuesday afternoon.

Exelon's license expires in September 2014 and sediments behind the dam have been identified as the highest priority issue for relicensing, Michael said.

However, Exelon did not, in fact, cause the pollution.  Lousy farming practices, cities and industries upstream in Pennsylvania and even New York are responsible for making the sediment run down the Susquehanna and contaminating it.  In fact, the dam has really only served to catch and trap the sediment and prevent it entering the Bay. In the absence of those, the dam would not have filled as rapidly, and the contents would not have been as deleterious as it is.  In the absence of the dam, all the sediment now stored, somewhat precariously, behind it would have already washed into the Bay.

Maybe they should beg and give them money to fix it, instead.
Posted by Fritz at 6:34 PM