­Appearing in the square in a see-through blouse immediately following the Pope’s regular Sunday address, the activist, Aleksandra Shevchenko, waved her banner and started pulling her clothes off. She was detained by Italian police in the space of minutes.

The Italian police were expecting their visit, and Shevchenko’s two associates were captured as they tried to make their way to the square. Femen says an Australian journalist who accompanied them was also detained for questioning.

The activists spent about four hours in detention.


As I've said before, whatever they're against, I'm for! Keep the protests alive!

Seriously, girls, if you don't want to be Catholic, nobody's forcing you. 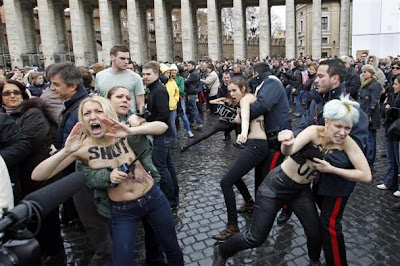 Wombat-Socho has the big Rule 5 post "Chrome Angel", up at The Other McCain.
Posted by Fritz at 4:39 PM