Not Just for tuna but for overfishing in general, a worthwhile cause IMHO: 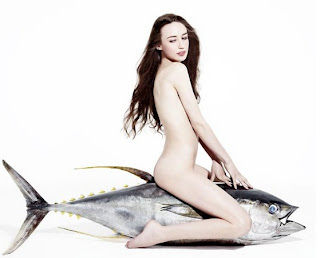 Mrs. and Miss Jagger pose topless together - for tuna


It certainly isn’t a new tactic, but it sure does work: going nude for a cause.

A la PETA’s “I’d Rather Go Naked Than Wear Fur Campaign”, supermodel Jerry Hall, 56, and daughter Lizzy Jagger, 28, stripped down to make a point: Save the tuna, which faces the threat of commercial extinction.

In a racy new photo campaign for Fishlove, an organization devoted to making a stand against overfishing, the mother-and-daughter duo are shown smiling and posing provocatively with dead, wide-eyed tuna. (According to the organization, the fish taken in the photographs were caught sustainably.) 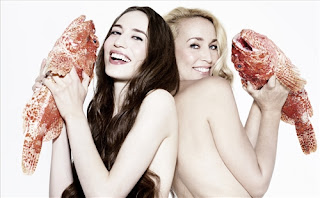 Is she going to to carve up that tuna for sushimi when she's done, or will it be too fishy smelling, and only be good for canning?  I mean after being out under the hot lights of the camera...


"I feel very passionately about keeping the oceans healthy, 80 percent of the life on earth lives in the ocean," Jerry Hall stated in a press release. "It's important that we take that power and buy sustainable fish.”

Fishlove co-founder Nicholas Rohl insisted that Hall and Jagger be photographed without any clothing in view. "We wanted to explore the relationship between the human and the fish, which meant that it had to be 'skin on skin', a bit like a mother holding a baby," Rohl told TODAY.com, adding that his organization did worry whether the images were a bit too provocative.

Interestingly, the fish in the photograph above is identified as a tuna in the article linked above, when it is clearly a Sebastes type rockfish of some sort.  Probably almost as endangered by overfishing as the tuna, so it's an appropriate target for a sustainable fishing campaign, but it suggests to me that reporters know almost as much about fish as they do about guns (high clip magazines and all).


Yet "we decided that it was far more important to get the message out there than to worry about offending a few people," Rohl said. "One of the accusations is that it is wasteful, using the fish in this way, but it absolutely wasn't. We [ate] all the fish we used for this campaign! We didn't throw any of the fish away."

Mrs. Hall might be a little old for such shenanigans, but in the photos, at least, she looks well kept.

Nice work, girls. Ordinarily, I'd say that whatever the cute girl nude protestors are for, I'm against, just to keep the protest alive, but in this case, I can't. So in the highly unlikely event that this protest solves the problem of overfishing, please find another worthwhile cause to pursue.


Hat tip to Gozer. Wombat-Socho has the big Rule 5 post "Chrome Angel", up at The Other McCain.
Posted by Fritz at 6:00 AM