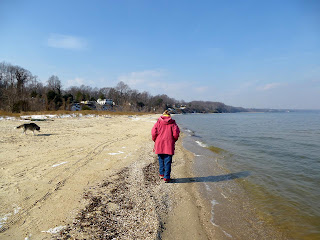 I got the girls to consent to go to the beach about noon today, after it had a chance to warm up to all of 35 F.  Not bad, as there was no wind, and plenty of sun. 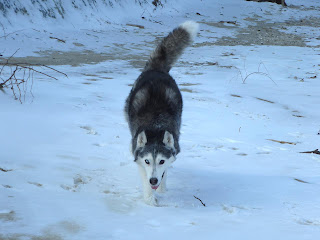 But in the shadows of the cliff where the sun doesn't hit except in the early morning while it's still cold, the snow still lingers. 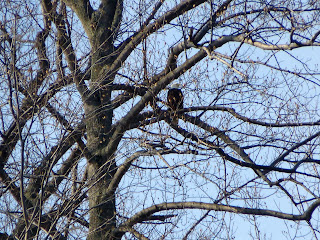 I'd all but given up on the eagles.  I hadn't seen them for several weeks, but when Skye and I got down to where we usually see them, the pair of them were there in one of their usual trees.  Maybe they've been vacationing or something. 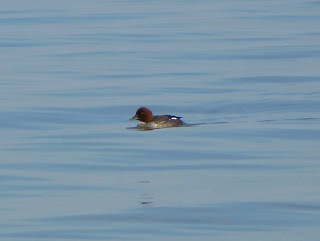 An unfamiliar duck.  Based on what I've been able to glean, I'm reasonably sure it's a female Common Goldeneye.  If you look at the picture full size (click on it) it appears to have a golden eye, and the plumage is about right. 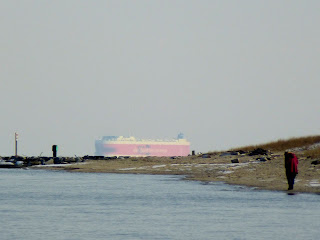 A long zoom shot of a big one coming up the Bay.  Georgia commented how it seemed to be riding high, as if it were empty. 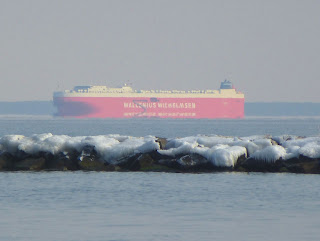 However, a close look (click on the image) shows that this is an illusion caused by the mirage.  You can see, and almost read the lettering in the reflection below the true waterline.  Even the "bulge" on the bow that many ships have, and show when light, is only the reflection of the upper curve.  The name on the side "Wallenius Wilhemsen" is not the ships name, but the Norwegian/Swedish name of the shipping company. 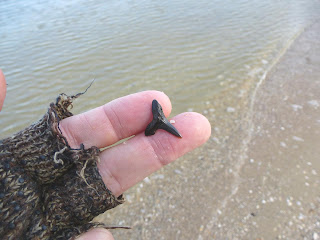 The fossil du jour. I'm not entirely sure which shark this is from, but based on the hint of the extra cusps on the sides, I'm tentatively calling it a Sand Tiger shark (Carhcarius taurus).
Posted by Fritz at 3:08 PM