I Just Found Out What It Is, and Now I'm Not Supposed to Eat it Anymore

Can yuppies stomach the unpalatable truth about quinoa?

Georgia has recently started using it in soups and stews.  It's OK I guess, but it's supposed to be the new super food:


Not long ago, quinoa was just an obscure Peruvian grain you could only buy in wholefood shops. We struggled to pronounce it (it's keen-wa, not qui-no-a), yet it was feted by food lovers as a novel addition to the familiar ranks of couscous and rice. Dieticians clucked over quinoa approvingly because it ticked the low-fat box and fitted in with government healthy eating advice to "base your meals on starchy foods".

Adventurous eaters liked its slightly bitter taste and the little white curls that formed around the grains. Vegans embraced quinoa as a credibly nutritious substitute for meat. Unusual among grains, quinoa has a high protein content (between 14%-18%), and it contains all those pesky, yet essential, amino acids needed for good health that can prove so elusive to vegetarians who prefer not to pop food supplements. 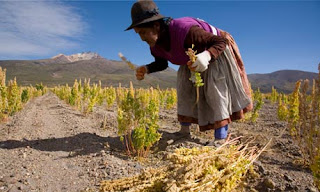 But now that it's just starting to become popular, the PC crowd is telling us we shouldn't be buying it because we'll be denying the Peruvian poor of one of their native staples, and corrupting them with our "junk food" culture.


But there is an unpalatable truth to face for those of us with a bag of quinoa in the larder. The appetite of countries such as ours for this grain has pushed up prices to such an extent that poorer people in Peru and Bolivia, for whom it was once a nourishing staple food, can no longer afford to eat it. Imported junk food is cheaper. In Lima, quinoa now costs more than chicken. Outside the cities, and fuelled by overseas demand, the pressure is on to turn land that once produced a portfolio of diverse crops into quinoa monoculture. 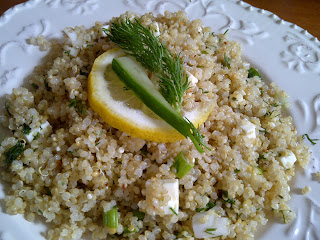 In fact, the quinoa trade is yet another troubling example of a damaging north-south exchange, with well-intentioned health and ethics-led consumers here unwittingly driving poverty there. It's beginning to look like a cautionary tale of how a focus on exporting premium foods can damage the producer country's food security. ..

So they're making enough money off a luxury starch to buy chicken (I presume they can buy steak too it they want) and I'm supposed to feel guilty about it?  I get very suspicious when an NGO starts talking about "food security".  That's almost enough to make me enjoy it.  Next thing you know, they'll come for our asparagus...


Feeding our apparently insatiable 365-day-a-year hunger for this luxury vegetable, Peru has also cornered the world market in asparagus. Result? In the arid Ica region where Peruvian asparagus production is concentrated, this thirsty export vegetable has depleted the water resources on which local people depend. NGOs report that asparagus labourers toil in sub-standard conditions and cannot afford to feed their children while fat cat exporters and foreign supermarkets cream off the profits. That's the pedigree of all those bunches of pricy spears on supermarket shelves.

There's an attitude out there among the self proclaimed elites, buying something from the native cultures, and helping them into the modern economy on a voluntary basis, is somehow a violation of something like "the Prime Directive".