Help, I've Fallen and I Can't Get Up at the Beach 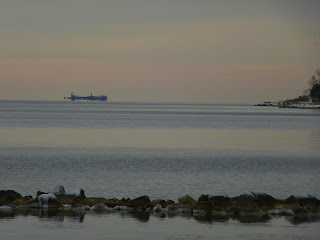 After a long morning, Skye and I got ourselves together, and headed off to the beach.  There is still some snow, and lot's off ice after the Wednesday night/Thursday morning snow.  It was cold (duh!) but still, and the mirage was working well.  Here the Dominion LNG platform floats over the bay 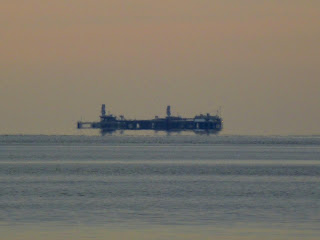 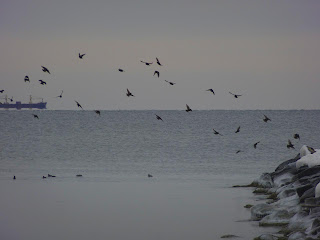 In zoom view, you could almost be fooled into mistaking it for a UFO.


A flock of Starlings (nasty invasive species) flit over the north jetty, and over the Bufflehead ducks.  You can see the ice on the jetty from when strong winds blew water up onto it during the sub freezing weather. 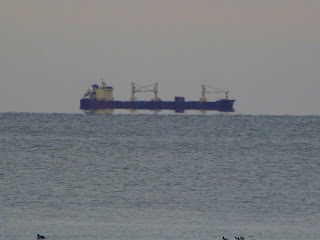 And a ship floats down the bay, with all but the highest parts of it superstructure out of the water... 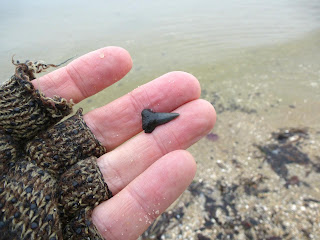 A small Mako Shark's tooth I found frozen into the beach. 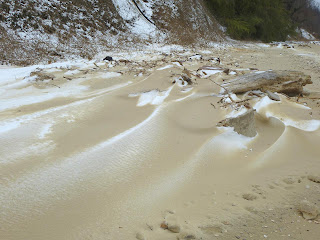 Sand and wind drifting in the wind make some unusual patterns together.  We're expecting a little more snow, starting sometime this afternoon, which will cover it all up again. 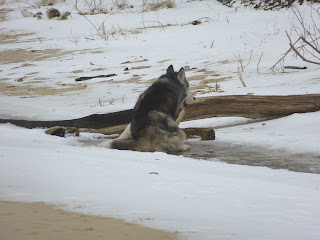 Poor Skye ventured out onto a small patch of frozen stream, lost her footing and fell.  I had to catch up with her (she was a ways ahead going back, as usual), and grab her collar and pull her up to the snow so she could get her footing back. She's so arthritic these days, that the walks are sometimes pretty tough.  But she still wants to go. 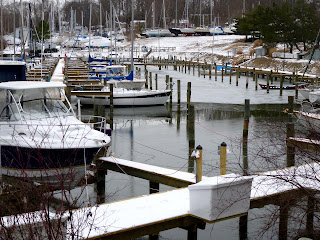 The harbor is starting to freeze.  A few more days like this and it could be completely iced over, and it could start to ice off the beach, too.  But the forecast is for some warmer weather later this weekend, so it probably won't get the far.
Posted by Fritz at 2:35 PM