Asteroid Mining, an idea whose time has come?

I can't tell you how many Sci-Fi stories I've read which featured asteroid mining. Can it be that it getting close to some version of reality?


A new asteroid-mining company launched Tuesday with the goal of helping humanity expand across the solar system by tapping the vast riches of space rocks.

The new firm, called Deep Space Industries, Inc., announced today (Jan. 22) that it plans to launch a fleet of prospecting spacecraft in 2015, then begin harvesting metals and water from near-Earth asteroids within a decade or so. Such work could make it possible to build and refuel spacecraft far above our planet's surface, thus helping our species get a foothold in the final frontier. 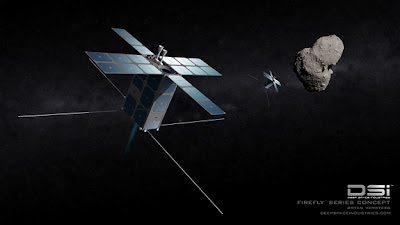 Deep Space will inspect potential mining targets with 55-pound (25 kilograms) spacecraft it calls Firefly, the first of which are targeted for launch in 2015.

Fireflies will conduct asteroid reconnaissance on the cheap. They'll be made from low-cost "cubesat" components and will hitch a ride to space aboard rockets that also carry large communications satellites, Deep Space officials said.

"We can make amazing machines smaller, cheaper and faster than ever before," Deep Space chairman Rick Tumlinson said in a statement. "Imagine a production line of Fireflies, cocked and loaded and ready to fly out to examine any object that gets near the Earth."

I'll look around for a suitable illustration later.
Posted by Fritz at 6:42 PM