The battle against 'sexist' sci-fi and fantasy book covers


Jim Hines straddles the remnants of a defeated alien species (a table), and clasps a pistol (a toy gun) as he triumphantly raises a cyborg's head (a toaster). Sometimes he fights battles alongside his romantic interest (a large teddy bear).

But no matter the mission, Hines shows some flesh. Just because he is waging a war, it does not mean he cannot be alluring at the same time, right? 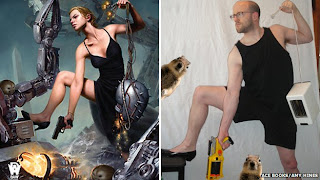 Um, yes it does.  Let's just get this straight.  You, Jim Hines, cannot be alluring.  Perhaps Brad Pitt could be alluring to the opposite sex, but you could never be alluring, regardless of pose.


Hines, a fantasy author, is posing like some of the female characters on science fiction and fantasy book covers he says objectify women.

He gets into character by twisting his body into the same contorted positions as the female characters on the books.

Where to start?  Do comic books and their cover present unrealistic portrayals of women?  You bet!  They're comics for God's sakes!  They're not meant to be realistic!  Realistic is boring, unless they're totally unclothed, in which even, they might still be boring.  These people are special; they have powers, and uncanny abilities and all that!


"The way women are portrayed is just so ridiculous, so often, you just stop seeing it," Hines says.

"I think posing has made people see it again - you see how ridiculous it is when a 38-year-old fantasy writer is doing it."


But, to be fair, the way they pose men is utterly ridiculous as well.   The poses are meant to be  action shots for the most part.  Have you ever taken a photo of someone in action, and been disappointed by a result that looked utterly awkward? That's because during motion, many of the intermediate points are not in balance and look odd when frozen.


Since he started in January 2012, Hines' poses have become the most popular posts on his blog. So he launched a new series in December to raise money to fight Aicardi syndrome, a genetic disorder that mostly affects girls.

Aicardi syndrome eh?  Sounds horrible. A worthwhile cause, I suppose.  But it's not my fault that males don't get it it, and it doesn't make me feel guilty that I'm not susceptible because of my Y chromosome.


The project is one of the latest expressions of a growing conversation about the portrayal of women in science fiction and fantasy cover art.

"Women are so often portrayed assuming that a stereotypical hetero male is going to be the person looking at the cover," says Hurley.

I think that's a fairly safe bet.  And most Cosmopolitans have females portrayed assuming that the person looking at the cover is a stereotypical hetero female.  Where's the problem with that.  Different genres have different target audiences.  Of course, there may be the rare lesbian that get's off on pictures of women (dogma has it that women are less stimulated by sexual imagery than men), but it's OK to have a target population.


"Male characters [are] powerful and strong, and women's sexuality will be emphasised. And why is that a problem? It's constraining for both men and women."

Many science fiction and fantasy readers are disappointed to encounter everyday sexism in a medium that is supposed to offer an escape.

I strongly disagree.  Women in Sci-Fi are routinely portrayed as smart and physically strong, far more than women in modern society actually push their way into physically demanding fields or into the upper echelons of the intellectuals.

Hurley says her goal is not to ban attractive women from book covers but to encourage publishers to include a wider variety of female characters.

"I worry about girls who don't see a character who looks like them and feel that science fiction and fantasy aren't for them," she says.

So, she wants a fat, ugly, and dumb chick (or maybe a skinny, ugly and dumb) chick doing unheroic for a cover?  I won't buy one, but if that's what you want, go for it, and let the buyers decide which ones they want.


Part of the challenge is that women have long been portrayed on book covers in the same manner - thin, white and conventionally attractive.

The stories of Conan the Barbarian are largely credited with transforming fantasy art in the 1960s. These covers showcased muscled men and servile women, a style that artists replicated in subsequent decades.

Frank Frazetta was the classic Conan cover artist, and he portrayed many strong women.  Just saying you're seeing what you want to see, not what's really there.


When Irene Gallo began working in the publishing industry in the 1990s, publishers were moving away from the women emblematic of the Conan covers.

"Our sales people were saying that we want sexy women on covers, but we want them to be in active roles," says Gallo, now creative director of Tor Books.

Covers are improving, but strong women in chainmail bikinis and tight clothing regularly appear in comics and subgenres such as urban fantasy and paranormal romance.

Ah yes, the infamous chain mail bikini, that I made fun of before?  It's no more unrealistic than fighting in spandex tights.


While these women are supposed to be fighters, critics say they are drawn in a way that renders them powerless.

"People think that if you give the girl a gun, suddenly she's a strong woman," said Silvia Moreno-Garcia, a fantasy writer.

"Critic say they are drawn in a way that renders them powerless", is total crap considering that they are often portrayed as wielding superhuman powers, magical or pseudoscientific.


"But maybe she's still a sex object. We forget that the pose, the cropping, the way it's painted [all] tell a story. So if you have one element that says strength - like a gun - but everything else doesn't follow that, that's not the narrative you think you have."

How about a sword through the guts of a giant beast, does that say strength?

Gallo thinks part of the problem is that male artists greatly outnumber female artists in the industry.

"You go to art school, and it's 50-50," Gallo said. "But professionally, it's overwhelmingly male.

"This is an unfortunate fact of the industry. These artists grew up with comics and gaming, so it's easy to perpetuate these things without thinking them through."

Damn those bad boys for going into a field they enjoy; drawing pictures of half naked, and in many cases, entirely naked women.  Why won't more women get into the field; I just don't understand why women aren't racing into the field.


Marketing strategies may also be responsible for sexist covers. But the mantra that sex sells may not be accurate.

According to 2012 data from publishing industry analysts Codex Group, less overtly explicit covers in fact have a wider appeal among general readers.

Uh, what, are you really that stupid or something?


"My guess is that it has simply evolved as category convention, allowing book buyers to instantly know that a given books is in one of their preferred categories," he said.

Sure, it's branding.  But it's also "Rule 5; everbody (but the hopelessly PC) loves a pretty girl".  Even the helplessly PC do to (at least the straight ones), they just don't want to let the great unwashed masses enjoy it troubled by guilt.


Hines, author of such titles as Libriomancer, The Mermaid's Madness and Goblin Quest, says many in the science fiction and fantasy community have not had to think about harmful messaging or sexism.

While momentum is building, Hines does not think the industry is at a tipping point yet. And that means readers will likely see covers he says objectify women for a while.

I haven't read any of his that I recall, but I'll pick one up the next time I find one with the cover ripped off for sale cheap, well, or free on Kindle.


Hines is just trying to make sure his covers aren't among them.

"My next book has a woman on the cover," Hines says.

"And I told my publisher: 'if you put her into one of these spine-contorted poses, the entire internet is going to make fun of you.'"


So you're going to have a picture of a fat, ugly (or skinny, ugly) girl, dressed in unprepossessing clothes, doing something utterly ordinary, in a pose that does not show off whatever feminine beauty she might be able to muster?  Let me know how works out, will you?