Claim: Meteorite discovered with signs of life in it

This looks to be a huge story, the first evidence of extraterrestrial life, if it holds up. I would remind readers that “extraordinary claims require extraordinary evidence“. This needs to be confirmed by others in the science community before it can be taken seriously.

This is from a recent meteorite find in December 2012. A large fire ball was seen by a large number of people in Sri Lanka on December 29th 2012, during that episode a large meteorite disintegrated and fell to Earth in the village of Araganwila which is few miles away from the city of Polonnaruwa.

Look at what the electron microscope shows of a sample purported to be from the meteorite: 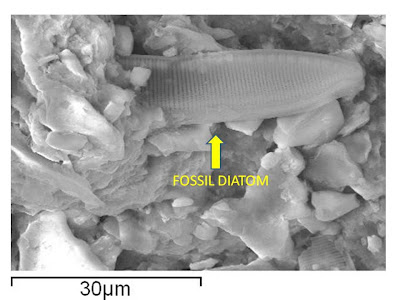 Yep, that's a diatom all right, I've counted thousands of them, and I don't doubt that a good algal taxonomist could identify it to genus and species, especially if it's a modern one.  Contamination from when it landed?


“Contamination is excluded by the circumstance that the elemental abundances within the structures match closely with those of the surrounding matrix.“