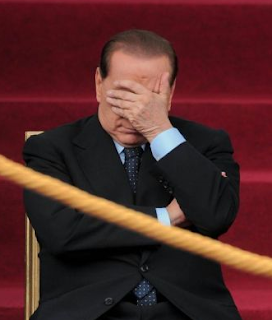 My hero, Silvio Berlusconi offers to resign after losing his majority in the Italian Parliament:

Italian Prime Minister Silvio Berlusconi said on Tuesday he would resign after suffering a humiliating setback in parliament that showed a party revolt had stripped him of a majority.

Best known, at least to my readers, as the Playboy Prime Minister, Silvio has been embroiled in a series of ongoing sex scandals.  Except that the word "series" implies a group of distinct incidents, and his just seem to be an ongoing situation.


Berlusconi confirmed a statement from President Giorgio Napolitano that he would step down as soon as parliament passed urgent budget reforms demanded by European leaders after Italy was sucked into epicenter of the euro zone debt crisis.

In addition to "Bunga bunga" parties, Silvio has presided over the fall of Italy into financial ruin.  It's not like Silvio had the power to ruin the country alone. He had plenty of help from Parliament, and Italian voters, unwilling to stop spending grossly more than they were willing to pay.  As the first "I" in PIIGS (Portugal, Italy, Ireland, Greece, and Spain), Italy seems to be the second of the group to careen up to the edge of disaster.


Italy's slow growth rates and large debts have moved it into the focus of financial markets, sending its borrowing costs to euro-area highs.

Italian finance minister Giulio Tremonti was expected to -- once again -- explain to his eurozone counterparts how and when Italy will put into practice a raft of promises made by Berlusconi two weeks ago.


Those promises have to be implemented "by the millimeter," warned Jean-Claude Juncker, the prime minister of Luxembourg who chairs the finance ministers meetings.


If it's true (the resignation, that is), I'll miss you, Silvio.  You may have been the ruin of Italy,  but you have provided endless entertainment along the way.

You don't have any sons to follow you into power, do you?

Linked at Jake Finnegan's Burkalesque Babe of the Week. And, a day behind the usual Sunday, the Wombat at The Other McCain posts his weekly collection, for Rule 5 Monday.
Posted by Fritz at 5:00 AM