Rockfish: The View from the Cape 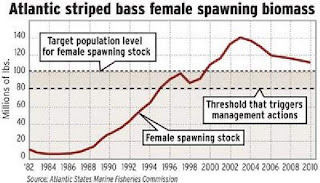 This is old news, the fact that the ASMFC has delayed doing anything about the decline in striped bass numbers, which I've covered recently.  However, it's worth posting again, if only because of the cool chart on the right that shows the progressive decline in the female spawning biomass over the past several years.

It also reflects the view from Cape Cod:

"Without striped bass there is no recreational fishing in Massachusetts to speak of," said Bradford Burns, president of Stripers Forever, a Maine-based organization that advocates game fish status for striped bass. Burns wants to see substantial cuts to recreational and commercial bass landings to counteract the recent population drop.

Despite these recent negative indicators, the stock remains healthy and at population levels that don't require management measures, regulators say. The size of the female spawning population, for instance, is 137 percent of the amount considered to be healthy and sustainable.

Although the fisheries commission delayed action, restrictions could be invoked if key indicators like spawning stock and juvenile populations drop below target levels.

"The bottom line is that this fishery has been managed well," said Darren Saletta, spokesman for the Massachusetts Commercial Striped Bass Association, representing 100 commercial license holders and charter boat captains.

Saletta said commercial fishermen and charter boat operators have a vested interest in seeing a sustainable striped bass fishery with an abundance of fish in the water. He said striped bass science is sound and has helped bring the fishery back.

"When the science is working, you have to stick with it," he said.

Much as in Chesapeake Bay, the recreational fisherman see more decline, and a need for greater regulation, while the charter and commercial fishermen are reluctant to cut back current levels of effort.
Posted by Fritz at 6:56 PM