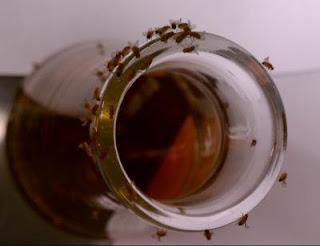 
Scientists at the University of California, Riverside posed a question that sounds like something you'd hear at a fraternity kegger:

Ever wonder why flies are attracted to beer?

The answer turns out to be simple. UCR said in a statement today, "flies sense glycerol, a sweet-tasting compound that yeasts make during fermentation." There's yeast in beer, and beer undergoes fermentation.

The flies "sense the glycerol because (they) have a receptor known as Gr64e," UCR says. "Once a fly has settled on beer, Gr64e detects glycerol and transmits this information to the fly's neurons, which then influences the fly's behavioral response.)

Somehow, I'm guessing that they're not quite as interested in why flies are attracted to shit.