The Continuing Adventures of the Twelfth Wife

Mbabane - A senior official in the Swazi palace Monday denied reports that King Mswati's 12th wife Nothando Dube had been banished from the royal household after quarrelling with a guard. The disgraced queen, who has been under house arrest since being caught in bed last year with the justice minister, was sent packing after she tried to leave the palace to take her injured child to hospital, South Africa's Sunday Times reported. 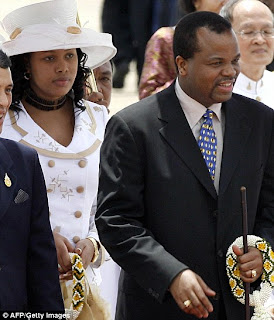 I first reported on Queen Dube back when Maggie at Maggie's Notebook posted her paean to dictators pretty wives, and I stole borrowed heavily from it...  Later when the scandal with the Justice Minister appeared it afforded the opportunity for this review.


"The inkhosikati [queen] is visiting her home and she will return," Timothy Velabo Mtetwa, regarded as the prime minister for traditional affairs, told local media. Mtetwa said the queen, known as LaDube, was visiting her grandmother in northern Swaziland and was expected to come back.

"Inkosikati LaDube left with her bodyguards, who are currently keeping a vigilant eye on her as she is still part of the royal family," said Mtetwa. He also threatened to take legal action against the Sunday Times for publishing false information.

Can you imagine what would happen if Michelle Obama was caught cavorting with Eric Holder?  A Late Night Comedy meltdown for sure.


Dube, 23, married the polygamist king when she was 16. He has since married his 13th wife.

The Swaziland royal wife selection routine is, well, unusual hardly covers it.  Up to 50,000 bare breasted Swazi alleged virgins gather for the "Reed Dance", and the King gets to take his choice.  Hey, it's good to be the king! 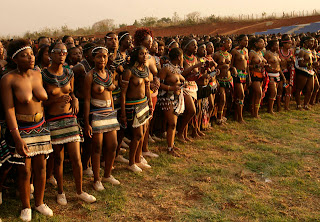 
She told the Sunday Times that she was roughed up by a guard at the palace gate and had to pepper spray him to protect herself. "He threatened to hit me, saying I am not going anywhere with my child, who was bleeding from a deep wound," she told the newspaper.

Her two-year-old child had injured herself while playing.

The matter was reported to the Queen Mother, who known as the "great she elephant" and she was later told to pack her bags and leave her two children behind, the paper said.

I look forward to further developments in Swaziland!
Posted by Fritz at 8:34 AM