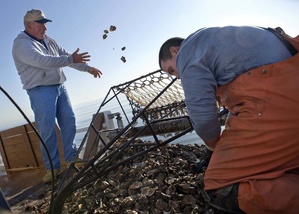 On Chesapeake Bay, a way of life dies off


Standing at the helm of his 106-year-old skipjack, Capt. Barry Sweitzer steered into the pre-dawn dark last week, eager to pull his first catch of the season from the northern Chesapeake Bay, the largest estuary in the United States. All summer, he'd been counting down the minutes until this day. "I was ecstatic," he said.

But as soon as the first batches of oysters were hauled onto the iconic oystering boat's deck, Sweitzer knew his season was over. Of the 250 oysters caught in that initial "lick," or pass over an oyster bed, 11 were alive.

But as soon as the first batches of oysters were hauled onto the iconic oystering boat's deck, Sweitzer knew his season was over. Of the 250 oysters caught in that initial "lick," or pass over an oyster bed, 11 were alive.

"The oyster industry in the northern bay is gone," he said.

Maryland's Department of Natural Resources confirmed this week that at least 74 percent of the oysters north of the Chesapeake Bay Bridge died in the spring from record-high freshwater flows into the bay from the Susquehanna River, the East Coast's longest river. The bay, bordered by Maryland and Virginia, is the largest estuary in the United States, with numerous rivers and streams emptying into it. More recent flooding from tropical storms Irene and Lee also might have killed some oysters, which rely on salty waters to survive, said Mike Naylor, the department's shellfish program director.

In my world, that job would have been long gone anyway, as would all wild oyster harvest in Chesapeake Bay, until some  sign that oysters had either recovered to a steady population, or the powers that be face up to the fact that they might never form a viable fishery again.

Oysters are down to about 1% of their estimate population at the hay day of Chesapeake Bay oyster fishing in the late 1800s.  While it's not reasonable, given physical changes in the bay (loss of hard substrate primarily) it is not unreasonable to suggest that oyster populations be allowed to recover to the levels that provided sustainable fishing in the 1960-70's.  If that can't be achieved, I see no reason to permit wild harvest of oysters.

Yes, it's sad that individual fishermen like Sweitzer are put out of work.  Since I hold the management agencies (and state governments and hence voters) largely responsible for the mismanagement of the resources that resulted in this chronic catastrophe, I would not be opposed to some kind of limited bail out of  watermen on oysters, but only if in so doing oysters are really protected, and not just protected until they really get big enough to harvest.