Science from the Duh! Files. 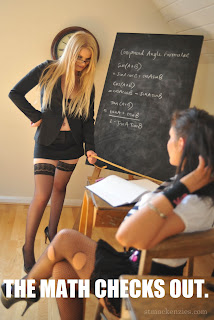 For both men and women, wearing revealing attire causes them to be seen as more sensitive but less competent


In an article just published in the Journal of Personality and Social Psychology, the researchers write that it would be absurd to think people's mental capacities fundamentally change when they remove clothing. "In six studies, however, we show that taking off a sweater—or otherwise revealing flesh—can significantly change the way a mind is perceived."

Past research, feminist theory and parental admonishments all have long suggested that when men see a woman wearing little or nothing, they focus on her body and think less of her mind. The new findings by Gray, et al. both expand and change our understanding of how paying attention to someone's body can alter how both men and women view both women and men.

Wow, who would have thought that how people dress would affect how people view them.  If only my mother had told me...


"An important thing about our study is that, unlike much previous research, ours applies to both sexes. It also calls into question the nature of objectification because people without clothes are not seen as mindless objects, but they are instead attributed a different kind of mind," says UMD's Gray."

This certainly goes a long way to explaining Ann Althouse's disdain of men wearing shorts.  However, living in Wisconsin instead of some place with a long, humid summer, like say southern Maryland also goes a long way.