Rule 5 Saturday - Avril Lavigne - She Could Be Your Girlfriend

I decided to get away from the actresses this week, and go back to singers for Rule 5 Saturday.  I ran into a picture of Avril somewhere and decided she was a worthy subject. 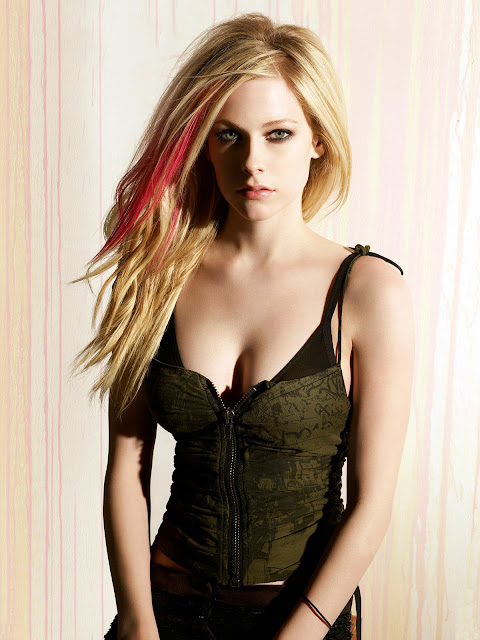 Another Canadian, Avril vindicates my ongoing belief that we should simply conquer Canada and be done with it. They would have something real to resent us for at that point, and we'd get, well, nevermind, we get it all anyway.

Not the world's best student, she was often in trouble in class. Her father bought her microphones, drums, guitars, karaoke machines, and set up the basement as a studio in an effort to provide her some other other outlet for her energy. It appears to have worked for him, even better than it worked for me...

Avril has had a bit of a contentious relationship with the media that cover entertainment, expressing a feeling that she wasn't being taken seriously as a song writer...

Now that was deep, wasn't it?  I really like how she plays three different girls, including the soulless ginger.

When you sell 30 million albums, you can pretty much tell the media where to stick it, and how deep.

I said I chose her as a singer, but of course, a little crossover into acting is kind of expected.  Once you get over stage fright, you might as well, right?  Anyway, she has also had some acting work, including a role on "Sabrina, the Teenage Witch", a voice over for a possum in "Over the Hedge" (what a waste), and a role in "The Flock" with Richard Gere (playing the bad girl).

She also played a part in "Fast Food Nation", where she played a snack a girl concerned about cows destined to become hamburgers.


Abbey Dawn is designed by Lavigne herself. Kohl's describes Abbey Dawn as a "juniors lifestyle brand", which incorporates skull, zebra, and star patterns, purples and "hot pinks and blacks". Lavigne, who wore some of the clothes and jewelery from her line at various concerts before its official launch, pointed out that she was not merely licensing her name to the collection. "I actually am the designer. What's really important to me is that everything fits well and is well-made, so I try everything on and approve it all." The clothing line incorporates Lavigne's musical style and lyrics, "after the release of my first album, I realized how much fashion was involved in my musical career

She has also done quite a bit of philanthropic work, including founding her own foundation:

And she's not bad looking as a vampire...

Ted is featuring another Canadian, Lexa Doiga this week. Mike at the Classical Liberal has something about Eva Green fixing the housing market. Maggie from Maggie's Notebook is featuring Adriana Lima this week, while the Classical Liberal is featuring Joan Jett.  American Power blog linked this in his Rule 5 post "Late Sunday".  Meanwhile, my effusive thanks to The One and Only Wombat over at the The Other McCain, who acknowledged all my Rule 5 ramblings from last week in his weekly canonical Rule 5 compilation.
Posted by Fritz at 6:00 AM