Women wearing stupid hats to protest, uh, something? The #WomensMarch: Why Trump Won 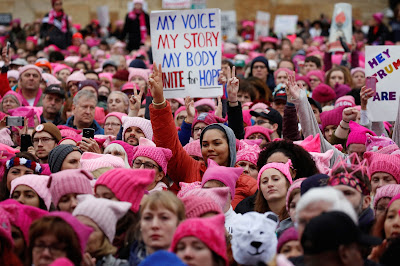 Does that look like a mainstream political movement to you?

Ugly women holding up ugly signs expressing ugly sentiments — the #WomensMarch to protest Donald Trump’s presidency is perhaps the clearest explanation of why Donald Trump is president. The all-out feminist crusade mounted on behalf of Hillary Clinton’s 2016 campaign reminded millions of Americans of why they hate feminism. Yet it is clear today that Democrats have learned nothing from their defeat:


Wearing pink, pointy-eared “pussyhats” to mock the new president, throngs of women descended on the nation’s capital and other cities around the globe Saturday for marches and demonstrations aimed at showing Donald Trump they won’t be silent over the next four years.
They carried signs with messages such as “Women won’t back down” and “Less fear more love” and decried Trump’s stand on such issues as abortion, diversity and climate change. . . .
The march attracted significant support from celebrities. America Ferrara led the artists’ contingent, and those scheduled to speak in Washington included Scarlett Johansson, Ashley Judd, Melissa Harris-Perry and Michael Moore. The promised performance lineup included Janelle Monae, Maxwell, Samantha Ronson, the Indigo Girls and Mary Chapin Carpenter. Cher, Katy Perry and Julianne Moore all were expected to attend.

Here’s a question: If “significant support from celebrities” has a political influence, then why is Hillary Clinton not president? Practically every celebrity in Hollywood lined up behind the Democrat candidate during the 2016 presidential election, but getting support from the rich and famous didn’t seem to help her win over working-class voters in Florida, North Carolina, Pennsylvania, Michigan and Wisconsin, did it?

Nothing like wearing a pink pussy hat to show how serious you are, right?
Posted by Fritz at 6:58 PM